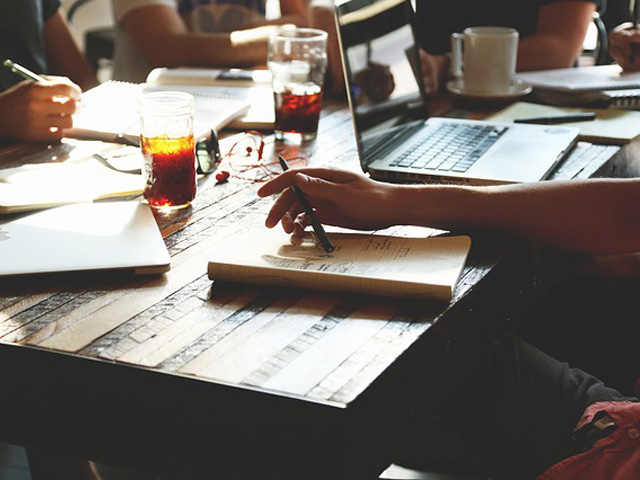 What’s in a writing group?

When you tell people you’re a writer, the likely image that springs to mind is someone hunched over a desk scribbling manically. If we’re going full Dickens, it’s usually dark with spots of candlelight. For a long time this was very much my scenario, although the desk was usually my lap or a coffee shop table and I’ve only recently become interested in candles. Still, hours of my time were spent on my own, walking through the narratives that I was creating. Lost in my own imagination.

I’d never really thought much about writing groups. I had at the time, and still have, a couple of friends who also wrote and while they were involved with groups we didn’t explore the idea of forming our own. It was only when I joined a short course at City University, on Novel Writing and Longer Works, that I finally became part of one. I’ve since joined another group, but I learned a lot from that initial toe dip.

I’d signed up to the course because I was determined to fix my discipline issues that had been creeping in over the years and to commit to finishing a project. While the course went some way to helping with that, the greater impact it had was in introducing me to the idea of workshopping. How it was an opportunity for someone who hadn’t been immersed in the narrative for weeks to offer a fresh perspective.

Part way through the course a few of us started going to the pub after class and we’d talk more about our hopes for further writing and ideas for the novels we were working on. As the course drew to its end someone suggested our group continue to meet and adopt the workshopping sessions into our gatherings. Thus, was our writing group formed. It was fantastic to sit with likeminded people and bond over the narratives we were creating.

In our first session five of us assembled at the usual haunt, bringing copies of the pages we’d worked on since the course finished. We read each other’s work over a drink and offered feedback afterwards. It’s a format we stuck with for the life of the group, although it’s not one that works for everyone. The group I’m currently a member of has a very different structure. There we write during our sessions, usually for around 45 minutes. We’ll see how everyone’s doing at that point and decide whether to carry on for a few minutes longer. Once we’re finished we’ll break to eat, and drink, before we take turns to read our pieces aloud. Everyone has an opportunity to offer critique at the end of each reading.

Critiquing work can be difficult at first, as can receiving feedback. Knowing how to constructively frame points is a skill that develops over time, but it’s important to be honest with each other. Our group was inexperienced in this, and at times it showed. There were occasions when people wanted to flag a point that they thought could benefit from further attention, but fear of coming across as mean held them back. What I’ve subsequently learned is to structure any critique I give. The best advice I‘ve been given is to state what was good about a piece, ask a question about a point and offer a suggestion.

Receiving feedback in a group can be just as hard. We want our stories to sit perfectly on the page, even though the reality is that it takes hours of editing to create something we’re somewhat happy with. This reality is not something we always want to be reminded of, but constructive critique is beneficial. It may alert us to something we hadn’t been aware of before or pinpoint the exact problem we felt, but couldn’t locate. On the other hand, not all feedback has to be taken on board. You need to be able to trust those giving opinions on your work, but that’s not the same as having to act on those opinions.

Our group was formed from the course we’d all enrolled on. We’d only known each other for a very short time, and like all social interactions, sometimes it doesn’t work out. After the first couple of sessions our initial five became a regular four. Perhaps our interests were too different, or they’d found another group that was able to offer more constructive feedback. Whatever the reason, that’s ok. Writing groups spend a lot of time together; it’s important that everyone trusts the others in the group and offers the best they can in critique.

It also takes commitment to keep a group going and circumstances can change. Our four members continued to meet for nearly a year after the course had ended, but jobs and time constraints reduced our number to two. We decided to carry on, but when the other member moved we realised that the time difference was too much for us to manage. Not that we didn’t give it a solid go, but a 12-hour time difference and 8am Sunday Skyping would prove tough for anyone!

Whether it’s meeting up in person once a month or catching up through email or Whatsapp, we have a variety of means to keep in touch and maintain our communities. While we didn’t succeed in maintaining our sessions online many others do. It’s a case of seeing what works for your group, and that’s true for all aspects.

A writing group doesn’t have to focus only on prose or fiction, nor does it need to be formed of individuals with a set amount of experience. In that first group, we were all students on the same short course and the fact that we were enrolled on a novel writing course completely influenced the work we submitted to each other. Every session was more extracts from the same stories we had been working on. At the time that is what we wanted support with and so the format worked.

My current group couldn’t be more different. We’re a bunch of friends, friends of friends and co-workers. Some of us have studied or are currently study creative writing, but not everyone. Each week we work on and submit a variety of prose, poetry, creative non-fiction and blog posts for workshopping. It’s fantastic to see so many different styles of writing, and it offers insight into areas that I haven’t explored before.

A writing group is a different kind of social interaction. For me, it has offered a great support system being with others who understand the hours spent writing and editing just to get to the draft in hand. It’s always a great chance to catch up with friends and devote some time to a craft that we love. I hope that our group will continue to meet for a long time yet; that sense of camaraderie and community has been a positive influence on my writing and beyond.

Lyndsey and The Secret Garden Writing Club will be running a free writing club workshop later this year.