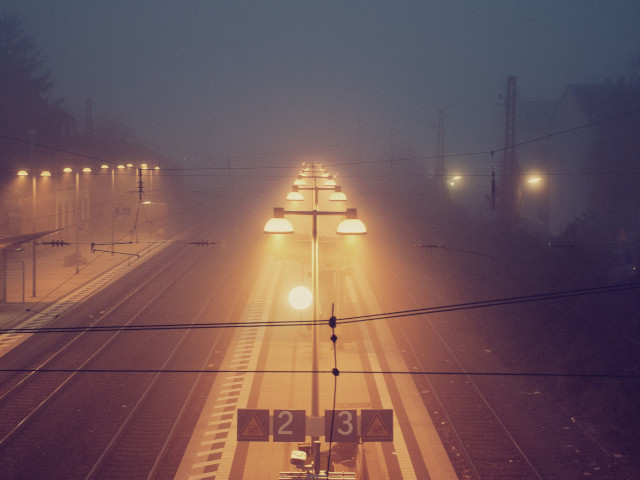 Moths, moths up and up to the lights, the lights with things that have died within, that leave the shapes of themselves inside the plastic cover of the orange light that bathes the station in a glow of the unreal. Unreal light, a light that falls in pools as far off lightning troubles the distant hills. You have to go, you are expected. There is no-one else here, no-one on the screens, no-one in the car park, no one to smoke a cigarette which this air was meant for, the warm exhalations of smoke that is so sorely needed now, so sorely needed to distract you from this walking of the platform.

One train comes in but you can’t board it. You pause and look at the button for the door, the little orange circle asking to be pressed. No-one gets off. Inside you can see a big man with an unkempt beard. Overweight, he stares out of the opposite window, nods along to his headphones. He is lost in some distant land, the land of music that makes his head bob in an off rhythm, a rhythm that speaks of supermarket grocery shelves, of car parks emptying, of too much washing powder, of three-litre bottles of Coca-Cola. Then he is gone, this brief interloper on the other side of the glass, he is gone with his silent music, he is gone and is just bubbles before they hit the grass.

Silence again, then far off a motorbike changing gear as it leaves the town. You think about how these stations are always at the edge, they are the boundaries, the lines between the towns and the country. The white wooded gables of the station roof, broken in places, some covered in the traces of pigeons.

Here comes some young people to roll you over and over with sublime ignorance towards their future. They sit on the other platform on the back of the bench with their hoods up. A boy and a girl. They could be shadowy figures in fairgrounds, underpasses, distant figures crossing motorway bridges between edge-land estates. The boy smokes, he is smoking and you were right, the smoke is beautiful in the light of the unreal, beautiful and meaningless as the flashes on the distant hills. Soon their train will come and take them towards the coast, back to the bedrooms that still have animals on the wallpaper, clocks shaped like Ferraris, medals from some distant sports day when the sun shone on everyone and some children felt triumph, some others felt defeat, others just the indifference of the lower numbers, the tumbling numbers of the commonplace, the unobserved.

Soon they will leave the station, these quiet kids who carry a shyness, a menace, a sense of something that fits perfectly with the Mind the Gap letters painted on the platform edge. This could be an enormous river, where whatever words you could shout to the distant bank would fall short and be washed away. They will say “Why don’t you go, weirdo, why don’t you just get on your train and trundle out of here, you loser!”

You know, don’t you: you have to go — it is expected, it is your father.

The train to the coast comes gliding in. Some poor scar in the fabric of the night, like a germ trying to cross the petri-dish beneath the microscope, a crude tear in the fabric of the night, a thing of diesel and entropy, a near empty thing that distorts your reflection. You look like an old man, it ages you this reflection, you look like an ageing giant in toy-town, riding the scenic railway to the top, squashed in a small carriage too tight for your legs, your face a fear of waiting rooms, of flights missed, dates missed, weeks missed, and this scenic railway rides you past all these losses, their scent rotting like perfume on petticoats in dumped suitcases. Then it beeps, this thing that mirrors another you, it beeps and the kids are gone and the lantern rouge waves like a ghost from a ferry as it disappears into the thick air.

Here comes another opportunity to go. This is the last train, the last possible connection on this particular day in June. It is just one single carriage. There are people scattered in seats, faces lit by the screens of their phones, they scroll down and down, past pithy statements exhorting them to share if they are real friends; past photos of elaborate dinners in some distant town now becoming energy, now becoming waste in the machines of their bodies; past echo-chambered articles that mean nothing, will change nothing; past adverts of men with china white teeth admiring themselves in mirrors with a toothbrush at a jaunty angle; past photos of Syrian children white with dust and blood smeared like awful clowns; past partly-concealed cries for help that no-one picks up on; past the bombast; past the braggarts; past the genuinely sweet; all hurtling forwards, all hurtling forwards and forwards, faster and faster, into less and less, all noisy and staring too long, staring too long while your father sits in some room on the edge of a town, still and inert and alone, staring at the door.

You turn and walk out of the station towards home. You will not wake your wife with her questions tonight, you will not rob her of her rest; you will sleep on the sofa with your face to the wall and to hell with it all, let it creep about behind your back, let the minutes slide by, let the impossible — night becoming day — happen without you auditing it, let sleep be a numbness, let the numbness push the fear into a twitch or spasm that your sleep will hide. 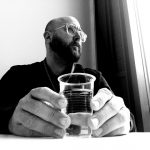 Andrew McDonnell writes poetry and short fiction. His debut collection of poetry, The Somnambulist Cookbook is being published by Salt in June 2019. He is an editor for Lighthouse Literary Journal and director with Gatehouse Press. He lives in Norwich and leads an English Literature degree at University Centre Peterborough, which means a long commute in which he can write. (Pushchair in the hall).