An extract from White Bear by Eloise CC Shepherd

When we get to the hotel he’s nervous.

“If I walk ahead of you, it’s just because everyone from work is staying here,” He pauses, coming closer, “great dress babe.”

American, he walks unevenly, a limp giving a heaviness on the right side. He’s the shape of a barrel, his hair and skin the same tan brown. Maybe twenty-five, thirty years older than me. No, I don’t fancy him.

The receptionist keeps her eyes down. I can’t see what’s in her head, but I don’t need to. The hotel is behind St Paul’s, the lobby lined with lacquered wood. I’ve been here before, with a Japanese businessman who made his bed with white towels in case I was on my period.

In the lift, the American puts a hand on my back, warm through my blue dress. My phone buzzes and he whips his hand away, scalded. It’s Gem, maybe wanting to talk staffing, or to check in. I reject the call, and turn the phone to silent, slide it back into my bag. These are pieces of my life I don’t want to collide.

He laughs, and stares at my tits.

The lift doors open and he’s furtive, stepping out like his actions could bite him. I understand. His room is a few doors down on the right. He fiddles with a key card until it buzzes and lets him in. The room is the same as all hotel rooms. Blinds tight across the window, sealing out the last bits of the day. He flicks on the sidelamp, which gives out little light.

“Do you want a drink? The minibar is a bust, but we could order up from the bar?”

I shrug off my jacket and sit in a blue armchair by the bed, lean my bag against it and cross my legs. He has to approach me. My brown boots click together as he pours himself a glass of water, and downs it in one long gulp. This is my favourite bit. Watching him watching me and knowing, what he wants.

The glass dully clinks as he puts it down on the side and comes over to sit next to me. Runs his hand up along my bare arm. I look at him and he kisses me, his mustache prickles. The arm of the chair digs in above my hip. His other hand pulls my dress down at the front and he forces his fingers between my flesh and the black material of my bra. It’s too tight for him to get far so I stand up and remove my clothes one by one until I’m there in my bra and knickers and he is drinking all of this in like he drank that glass of water. I don’t know his name.

My bra unhooks easily and I pull it forward and off, lying back on the bed. He has to be the one to slip off my knickers. He fumbles with his shirt, misunderstanding because I don’t want him to remove anything, just unzip. It’s not necessary to see his body.

He has a tattoo on his left pec, two names in a heart. It’s elegant, the heart stylized, slightly elongated, the ink at the bottom not quite meeting. When he sits down next to me, touching me, I touch him there and ask, who they are. It’s the first time I’ve touched him.

“My dogs” he says, pulling back and suddenly somewhere else as if not here shirtless, jeans open with a naked woman half his age, “they both died within a few months two years ago. I wanted to mark it, they were such great dogs, both of them – Sammy and Ted,” he points at each name.

I see his life. Day in and out at the job he’s told me about, computers, systems, few meetings. An expensive car and a big empty house in a town somewhere near Washington. I hurt for him. I responded to his ad because it was one of the few that didn’t scare me. A gentleness.

He strokes me, neck to nipple but managing still, not to be close. But I like the look on his face. This is why I am here, that look, the desire in it.

He pushes me back on the bed and kisses my tits and this then is a private moment for him, a wilder thing coming out in how he is licking, there is desperation. I lie back and look at him, feeling the wetness of his mouth, disgusted and aroused, the two things are not so far from each other. My hands are above my head, open to the sky which remains there above the heavy cream ceiling.

His tattoo reminds me of Nas. I sent one email but I will not send any more. It doesn’t take long to learn that the ones who don’t try, you let go. Not much to go on from a first name and a mobile number either. On google all there is is the contact page for his business, and an ad he placed to sell a bike on gumtree a few months ago. No pictures, no facebook, no twitter. So I leave it. But think of his nut-brown eyes, his megawatt smile, his tattoos. I need to be careful.

This man, the American, removes my knickers, pushes his wide fingers inside me. I don’t react much. I am holding my breath.

“You’re wet.” He says. Of course. I was thinking of Nas. Him in my bedroom, naked, pushing his dick inside me for the first time, his body almost magazine beautiful, and – a sweetness I can’t explain that made me trust him.

So this American enjoys, the arousal that comes from the ache I get for Nas. He kneels on the floor and presses his mouth into me. I almost jerk away from him. After a few seconds he pulls back.

“So wet, it’s beautiful. I want to make you come.” He says. That’s pressure. Mostly when it’s like this I don’t. It isn’t about that, I can come on my own. With Nas of course this was different. I came so hard my body uncurling with the power of it. I held him so tight I left marks – wanting him to feel me clench and clench for him, feel me wanting him there. Soon he’ll fall out of my head, it’s fine. I am good at forgetting men.

The American is licking me and I try and focus on that hot pleasure. He’s still half in his jeans, kneeling against the bed. A lover once asked me how it feels when I come. All I could do was play him the live version of Nick Cave’s Jubilee Street – that inevitable rising and rising, the epiphany, the feeling of touching something so much bigger than myself. I don’t think he understood.

The American wants me to react.

“Fuck me.” I say, because I can’t reach the pleasure he is trying to give me.

He stops and looks awkward. Stands. removes his jeans. His boxers are baggy and grey. He pulls them down too, he’s hard, small, like a thumb, or ammunition. He knows this, his face is pained.

“Is that enough, to make you come?” he says.

I put my hand around it.

“Of course, smaller is better than big, because it will only feel good, it won’t hurt.” I hope this helps, the depth of that sadness is painful.

The American climbs on to the bed between my legs.

“Wait – you have to put something on it!” I say, voice rising because I do not want him in me unprotected. Not again, I can’t again.

He jobs around to his wallet on the chest of drawers and pulls out a condom. I hear the foil ripping and so quick he is back between my legs pulling it down his length.

The American inserts himself, not making eye contact, his eyes flicking between my tits and the wall.

“Oh you’re tight.” He says. When men say this, sometimes what they mean is, ‘you’re younger than me’. I squeeze him tighter, wanting him to finish quickly, then I can go home. My hands are by my sides.

“Yes…” he says, his fingers all over me. From his grimace I don’t think he’s going to last long. Please, please don’t last long. The sheets twist in my hands. I look at the ceiling, at the thick texture of the cream paint, the black lampshade.

He shudders, and finishes. Disappears to the bin to remove the condom and I hear him pad over to the bathroom. The tap goes. His feet make a different noise on the hard tiles. Nothing hurts, I’m whole. Sort of numb.

I don’t move. This is long enough now, this is pain. He moves my legs,

“Your turn.” He says, back to it, his mouth on my cunt. I don’t want a turn, but I can’t say anything. What would I say. It hurts he’s sucking me hard I don’t know why, I try and pull back but he had me so tight.

He stops and looks at me, right at me, eye to eye. My hands go to my head, pressing in, elbows at angles. The strap of my watch smells like my perfume.

“I can feel a migraine coming on,” I say, pushing my knuckles into my eyes so that when I move them away, my vision will blur.

“Can I do anything?”

“A glass of water, sorry, thank you.”

He gets up and I pour myself off the bed and rummage in my bag for headache pills. Not that I have a headache. I want him to believe that, other than for the headache, I would have stayed. Thank god, there’s half a pack of ibuprofen from when I was last on. Nothing much in there but endless notebooks and half used lipsticks. Pens that don’t work.

“Thank you,” I say, as he passes me the water. It has that strange bathroom taste. I gulp it down with the pills. I can’t look at him.

“This is only going to get worse, I’m going to have to go I’m sorry. I’ll be lying in bed all night with a towel over my head.”

I pick up my knickers and bra.

“Aw, sorry babe, do you want to come back tomorrow? I have a spare room key.”

From the desk behind he picks up a black keycard and offers it to me. He’s still completely naked. What is he thinking? He has laptops piled up on the chest of drawers, he doesn’t know a thing about me.

“You could just take it, and throw it away after tomorrow…” he says, card still in his fingers, “It’s fine, I’d love to see you again.”

He returns the card to its cardboard holder.

“I can pay.” He says in a quiet voice. What have I done here. I am punching a broken doll.

If I could I would touch him. But it’s all I can do to put my clothes on.

Inside there’s part of me screaming. At the door he kisses me deeply.

I find my way out of the hotel. It’s dark now, London lit by streetlamps, by the light from buildings. I catch a bus from the end of the road and manage to get the seat at the front, top deck. Adjust my dress. I don’t think I smell like him. 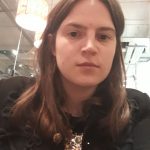 Eloise CC Shepherd is a writer with a surprisingly successful sideline in boxing. She is co-founder of www.liminalresidency.co.uk, an alternative writers’ retreat taking place in neglected and unusual spaces. You can find her work in, among other places, New Writing 13 and the Fiction Desk.