The snow fell in late summer, settling on the roofs and the pavements and the grass. By the time Tom got to Rory’s house, the snow was halfway up his boots. Rory’s hat had big flaps that covered his ears. He looked like one of those droopy dogs. When Tom said that out loud, Rory gave him a punch on the arm.

They couldn’t believe how white everything was. Last week they’d hung out in shorts and T-shirts, but now the sun was just a faint shadow behind the clouds. Tom imagined himself as Captain Scott fighting his way through a blizzard. Rory gathered a huge handful of snow off a car bonnet, packed it together, and threw the ball at Tom. He ducked, but not quickly enough, and a spray of snow went under his scarf and down his chest, making him shiver.

At the park they stood at the bottom of the big hill, looking up. It was crowded with people, some making their way slowly up, others hurtling down to the bottom on boards of bright red and blue plastic. Tom often went up to the top of the hill. From there you could see out over the whole town and to the countryside beyond. It was so high up, so steep, he couldn’t imagine what it would be like to sledge down it. How did you stop?

Tom didn’t have a chance to reply before Rory started on the instructions. They would each build up a defensive wall of snow, a few metres apart and throw snowballs at each other, like grenades.

Rory’s wall turned out bigger and better and his grenades were harder and his throwing more accurate. Tom got hit again and again, while his own efforts either fell short or sailed over Rory’s head. Then Rory jumped from behind his wall and blitzed Tom’s defences. Tom covered his head with his hands and felt the thud of each ball as it hit him.

Tom got home in time for tea, but when he clattered into the kitchen, leaving a wet trail behind him, his mum was still cooking. Actually, what she seemed to be doing was staring into a saucepan, not even stirring it. Tom watched for a moment, then said, ‘Mum?’

She jumped, turned and smiled. ‘Hello, sweetheart. Tea will be a few more minutes.’

She went back to her staring. Was this some kind of new way of cooking? If you could make a meal just by staring at it, maybe even he could do it. He looked down and saw that there was a puddle of melted snow under his boots. She hadn’t even told him to take them off. He wanted to ask her if she would help him build a snowman in the garden after tea, but he didn’t want to make her jump again. Just inside the back door were loads of plants and flowers in pots. Like she had brought the whole garden indoors.

He was in bed when he heard the key in the lock and his dad stamping his feet on the mat. Tom rushed down the stairs and hurled himself off the bottom step.

His dad caught him and hugged him. ‘Hey, Tomster. This snow, eh? Can you believe it? It’s supposed to be summer!’

Tom told him all about what he and Rory had done at the park. His mum came down the hallway and his dad said to her, ‘The road was blocked. I had to go the long way round.’

‘Wrong kind of snow, no doubt,’ said his mum, and they both laughed.

‘It’ll probably be gone tomorrow,’ his dad said, and Tom felt a pang of sadness that it would all be over as quickly as it had started.

But the snow didn’t disappear the next day or the day after that. Tom’s dad stayed at home and dug pathways around the house. His mum made lots of trips to the supermarket and the kitchen filled up with tins and packets. When they weren’t busy doing other jobs, they listened to the radio or watched the news and the weather forecast. The weather was the news. The map of the country on the telly was almost entirely white. No end in sight, said the man standing in front of the map. Tom and Rory played at the foot of the big hill. Rory said it was like the planet had shifted, and they were now like Australia, because they had their seasons the wrong way round.

It kept snowing. Every day was the same. Then, about a week after the first snowfall, the soldiers arrived.

Tom and Rory watched the vehicles rumble past the swimming pool. There were three of them and they had special things on their tyres so that they didn’t slide on the ice. They came to a halt outside the Methodist hall and the soldiers all got out. Tom counted eleven. A crowd had gathered to watch. Some people were shouting, but Tom couldn’t make out what they were saying. A couple of others were clapping. One of the soldiers stopped to talk to a woman standing at the bottom of the hall steps. She held out her hand and the soldier shook it, smiling. She must have said something funny because the soldier laughed loudly before releasing her hand and jogging up the steps to join the rest of his group. His rifle was strapped firmly to his back.

That evening the letterbox clattered, and Tom rushed to the door. Lying on the mat was a leaflet. He picked it up and just had time to read ‘Instructions for your safety’ before his father took it from him, folded it and said, ‘It’ll be all right, Tomster. There’s nothing at all to worry about.’

There were new rules. Tom and Rory had to be indoors after four o’clock, while the grown-ups weren’t allowed out after nine. The taps only worked sometimes, and the electricity kept cutting out. Tom and his parents spent several evenings huddled under blankets in the back room, watching the candles flicker and send shadows up the wall. Every day, Tom and Rory watched the soldiers helping people to dig out their cars, or handing out huge canisters of water. Tom lost track of how many days had passed since the snow came. Was it September yet? Nobody had mentioned going back to school. Rory said his dad reckoned the government had done it deliberately, found some way to make it snow so that they could trap everybody. Tom didn’t think that was right, because nobody could control the weather except God. Could they?

They were in the park when they saw one of the soldiers standing at the gate.

‘Come on,’ said Rory, heading off.

‘Where are you going?’

Rory put a gloved finger to his lips and gestured to Tom to follow. He led Tom towards the clump of trees at the side of the park. The soldier was facing the road, his back to them.

He moulded a snowball and kept patting it to make it extra hard.

‘What are you doing?’ said Tom.

Rory hurled the ball towards the soldier, and it exploded just behind him. The noise of it made him turn and reach for his weapon. Rory ducked down, pulling Tom with him. They stayed like that, crouched and folded into one another. Tom’s legs began to ache and he tried to get free of Rory’s grip. He could feel Rory’s heart beating through his coat, and his breath blooming hot on his cheek. Any minute, Tom expected to be hauled to his feet by the rough hands of the soldier, or see a rifle pointed at him.

Rory raised his head. ‘He’s not coming. He hasn’t seen us.’ He stood, then laughed. ‘He’s gone! Running scared!’

That night, Tom was almost asleep when he heard his parents arguing. He couldn’t hear what they were saying, but it sounded like they hated each other. He got out of bed and looked through the window. It was snowing again. Still snowing. He’d made a snowman, in fact, he’d made two, and they were standing out there in the garden as if they were having a conversation, comparing carrots.

But what he really wanted to build was an igloo. He’d read that they were warm inside despite being made of snow blocks. It would be so great to be able to go inside one and feel that warmth. He was sure it would be really quiet too. He could live in there, cocooned, until everything went back to normal.

Tom knocked at Rory’s door, but nobody answered. Rory always waited in for him, so where was he? Tom looked up at the bedroom windows. The curtains were shut. Was Rory still asleep?

He knocked again, then peered in through the front window, cupping his hands around his eyes. The living room was a mess. The furniture had been moved around and the coffee table was overturned. There were books all over the floor. The telly lay on its side. At the far end of the room, there had been a fish tank, but the glass had been shattered and the fish lay motionless on the carpet.

Tom took one step back, then another. He turned and stumbled through the snow. He fell into a drift, feeling the cold seep through his clothes on to his skin. But he quickly got to his feet, hurrying away from Rory’s house and the chaos inside it.

The park was deserted. There wasn’t even anybody on the hill, climbing up or zooming down. Tom had a sudden urge to be up high. He wanted to be able to see the whole town as if that would give him answers.

It was hard going. The snow sucked at his boots as he struggled upwards, and more than once he had to reach out his hands to the ground to steady himself. He thought of Captain Scott again, how he and his men had holed themselves up and waited to die.

At the top of the hill, Tom turned and tried to look out over the town. But the snow was coming so thick and fast now he couldn’t make out any detail. The town and the countryside beyond were buried under a blanket of white. Where was everybody?

A few feet away he saw something blue, sticking out of the snow. Digging around the edges, he managed to pull it out. A sledge, abandoned.

After brushing off the rest of the snow he placed the sledge on the ground. Sitting on it, he pushed himself forwards and backwards a few times with his feet. The sledge ran smooth. It glided.

He stopped at the brow of the hill. The wind bit against his cheeks and scoured his eyes, making them water. He could see no end to the hill. It went on forever and ever. He wouldn’t need to stop.

He pushed himself off and flew. 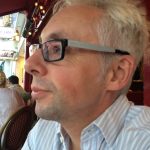 Ian Critchley is a freelance editor and journalist. His fiction has been published in several journals and anthologies, including Neonlit: Time Out Book of New Writing, Volume 2, The Mechanics Institute Review #15, Litro and Storgy, and his journalism has appeared in the Sunday Times, Times Literary Supplement, Literary Review and Telegraph. He can be found on Twitter: @iancritchley4, and his website is iancritchley.wordpress.com.