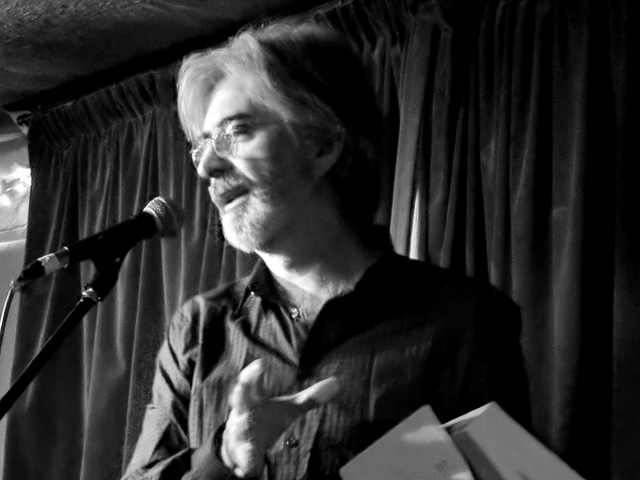 Outside the cold was biting, but in the basement of the Harrison we sat in the warmth, nestled in the glowing darkness, inspired by five writers and our headline author, Neil Griffiths.

The final MIRLive event of 2017 began on the 18th December, with an original, entertaining and well-crafted story by Martin Nathan. “The Gift” focused on Frank Lord’s antique shop, a place which sells only the absurdly kitsch and the bizarre. The demise of the shop parallels the end of the narrator’s relationship with his girlfriend; not even a Christmas gift, a model of Jesus oozing fake blood at the touch of a button, can save it.

A sense of loss was further developed by James Bennison whose touching story, “The Blank Page” took us through the narrator’s memories on the death of his father. Each episodic moment took us further back in time, layering the piece, allowing us further glimpses into the relationship between father and son.

This was followed by Kate Jefford whose extracts from her novel- in – progress were both powerful and poignant. The vignettes were called, “Sister, Lover, Doctor,” indicating the roles the protagonist plays in her life, each one evoking a sense of expectation, of sadness and despair, of muted passion and needs left unfulfilled. These emotions were understated, yet barely held at bay.  Despite this, even the sequence in which the protagonist details her brother’s last journey before his suicide had moments of humour in it. Carefully selected details throughout, made the writing vivid and packed a punch, yet in the final piece, we were left with a moment of absurdity which had us laughing on our way to the bar for our interval drinks.

Martin Wakefield opened the second half with an unsettling piece called “A Christmas Film.” James Wise and Melanie Jones were enlisted to provide the voices of the television actors in the story, and are no doubt expecting their equity cards in the post. Their roles were significant as the melodrama on the television provided a backdrop and parodied the protagonist’s anxieties and emotions in the story. Each scene gave us insight into Karen’s life, her childhood and her current relationship with her lover. With a nod to Hitchcock and film noir, Karen gazes at “A huge survivor elm” which “sheds rooks like black leaves” before visiting her demented mother who no longer recognises her. Her mother immerses herself in the hollow fiction of the television, incapable of engaging with the reality of her daughter’s needs.

Next into the spotlight, was Lyndsey Garret, who read the first half of her dystopian story about an island devoted to sufferers of a plague. The evocative details in her story, “The Darkness behind the Walls” created an atmosphere of tension, which increased as the audience’s understanding of the situation grew. When we discovered that Martha is not a volunteer but has been sentenced to nurse the dying as a punishment for murdering her own diseased child the feeling of fear and doom was heightened. No wonder this story was highly commended in the Bristol short story competition this year.

The denouement was created by Neil Griffiths, who won the Author’s Club Best First Novel with “Betrayal in Naples” and whose second novel “Saving Caravaggio” was shortlisted for the Costa Novel of the Year. We were privileged to have Neil Griffiths read to us from his new novel “As a God Might Be.” This is a thought- provoking novel which grapples with the question of man’s relationship to a real or imagined Christian God through a plot which hinges on an act of murder. The extract Neil read was highly entertaining. The protagonist, Mc Cullough sits in a pub explaining his job as an “atrociologist” to four disenfranchised young locals. His job, it seems, is to anticipate how people will react to terrorist attacks, in moments of stress and despair. McCullough’s energetic, descriptive hypothesis is peppered with amusing responses from the youths to whom he is proselytising. The questions posed were relevant and compelling, effectively introducing one of the novel’s main themes – of how far love can be tested.

Each of our authors provided a welcome gravitas, offsetting the saccharine sentiments threatening to overload me in the media in the run up to Christmas. I went home buzzing with the ideas raised and I can’t wait for the next MIRLive event of 2018.