Miki Lentin reviews  Notes to Self: Essays by Emilie Pine

There were times when I was reading Notes to Self: Essays by Emilie Pine, that I was transported back to Dublin, Ireland in the 1980s and 90s, where I grew up.

Dublin was not too dissimilar in many ways then, to the world that Pine depicts. Heavy drinking was endemic amongst my friends’ parents and my father was no exception, mixing with Dublin’s cliquey theatre and television crowd. Protesting was not the done thing, but those who were brave enough to speak up, like my journalist and academic mother, were jeered by men as they marched to demand an abortion referendum and women’s rights. Add to that the intense, suffocating and patriarchal grip that the Catholic Church had on Irish society, which left many deep shattering scars, Ireland then was a draconian country on the edge.

It is against this all too familiar backdrop that I was keen to read Notes to Self, Pine’s first non-academic book. An Associate Professor of Modern Drama at University College Dublin, Pine’s series of essays read more like a memoir, a courageous collection that explores many taboo subjects; miscarriage, alcoholism, infertility, rape and depression.

Ireland, today has changed, somewhat. But, coming so soon after the Repeal of the 8th Amendment, and the legalisation of gay marriage, this book is both timely and relevant. However, what’s unique about this collection is not only the way in which Pine carefully treats her life and experiences but also the almost visceral language she uses to describe the painful appreciation of her truth. At no stage does she seek pity or empathy, but Pine wants the reader to understand the complexities, as she says, of the “struggle to know what to do with this personal history.”

Written initially as a journal, scrappy notes that she hid in a drawer, they were discovered by her partner who suggested they were the best thing she’d written. Sceptical at first, Pine believed the notes should remain hidden. After all, as VS Pritchett said, ‘you get no credit for living’, but Pine was persuaded, and approached the independent Irish publisher Tramp Press, publishers of non-fiction. They were so taken by the initial 8,000 words, they suggested she write, ‘anything you like’.

Pine’s father, who she writes about in the first essay, ‘Notes on Intemperance’, about her father’s alcoholism, taught her that ‘writing is a way of making sense of the world, a way of processing, of possessing – thought and emotion, a way of making something worthwhile out of pain’.

There is a chaotic sense of pain that resonates throughout all of these interlocking essays. The pain of living with an alcoholic father who selfishly leaves the family home, and the reality of having to look after that same selfish man years later. The difficulty of not being able to have children when everyone else around you has, and the stress placed on her body and relationship. The experience of sexual violence and the extreme distress of taking the risk to open up about it. The tough reality of teenage years growing up in London, yearning for something, anything that would help take away a growing sense of loneliness and failure. And the overbearing stress of constantly having, as a woman, to impress in a misogynistic workplace dominated by men, and the shame of admitting that sometimes, she did not know who she was, or what she was doing anymore.

Throughout these essays, Pine’s clear, urgent and dignified tone shows that she is constantly trying to make sense of her world. In the essay ‘Something About Me’ about the sexual violence she experienced in her teens, Pine says ‘I didn’t know the right rules’, and she writes as if there are no boundaries to her prose. Brutally honest, heart-wrenchingly evocative, her short sentences are cut with clear and alarmingly real statements that are not just powerful, but somehow, are exactly what you wish she would say. Her compelling ability to be honest, without forcing the issue is what makes these essays so readable.

In ‘Notes on Intemperance’ she writes that ‘After years of teaching Beckett plays, I am finally living in one’. The use of theatrical imagery throughout is pertinent and obviously no surprise. Beckett created characters that were, as she describes herself, ‘irretrievably unbalanced’, and are often caught in a gap between their own life stories and what’s going on around them. She calls these gaps “layers of silence”.

Pine describes the frustrations and silence of growing up in a single parent household. The break up wasn’t discussed and her parents didn’t speak to each other for years. Her experience in the longest essay, ‘Notes on Bleeding & Other Crimes’ of miscarriage and infertility, portrays the silence and anger of not openly being able to discuss her body, especially with the medical profession. She’s angered by the silence around the things women traditionally haven’t been able to discuss especially,“the silence and secrecy and the warped idea that blood is taboo when it comes out of the vagina.”

This is the Ireland I remember. Silent stories of parents of friends separating, as divorce wasn’t legalised until 1995 (by .56% of the vote). Silent stories of women and men, like my father, going through deep depression but unable to find the outlet to address it. The incomplete story of an attempted suicide by a school friend who suffered from drug abuse and alcoholic parents. Many of these people were like Pine, a “negative cheerleader”, someone very much involved, but not being told the complete truth or able to tell their truth, inferior understudies, to the main event going on around them.

And yet, Pine’s prose is punctuated with detailed humour and poignant sadness. In ‘Notes on Intemperance’ disgusted by the filth in a hospital ward, she mimes to a nurse to put on a pair of plastic gloves as the nurse treats her father, a scene I could almost see being played on a stage. In ‘Speaking / Not Speaking’, an essay about the separation of her parents, she describes the simple, yet heart breaking pain of not being invited to a party when she was a teenager or her father shouting at her for disturbing him. These silent, personal childhood memories, often etched into one’s mind may seem like minor details, but are stories of helplessness, loneliness, frustration that we all share.

Finishing ‘Notes to Self’, I was reminded of a quote by Deborah Levy in Hot Milk, when the main character Sophie says that “it is so hard to say out loud the things I want to say”. Writing for many of us is our way of speaking aloud, often when you can’t find the words to say what you really feel. Writing, despite the pain it sometimes brings, can take you closer to admitting the truth about yourself, the awkward and complex silences that exist in all our lives, the hidden secrets that no one else knows, the questions you want answered, the dilemmas you want to solve.

As Pine says, towards the end of the essay ‘Something About Me’, “the urge to write this feels not only dangerous and fearful and shameful, but necessary. I write this now to reclaim those parts of me that for so long I thoroughly denied. I write it to unlock the code of silence that I kept for so many years. I write it so that I can, at last, feel present in my own life. I write it because it is the most powerful thing I can think of to do.”

Writing for Pine has allowed her to make sense of her world. In a moving scene in the last essay, ‘This is not on the Exam’, about issues of mental health at work, she learns how to ride a bicycle in her thirties by first balancing with no pedals. She’d let go, become herself, as she recalls, “that feeling of gliding and flying and whooshing now, and I wonder what was I so frightened of? And why can’t I do that – just let go – more often?” This is a book everyone, women and men, should read. Not only because it’s timely, not only because it can remind us of our own lived experiences, but because we should all take the time to consider each other more closely, seriously and carefully.

‘Notes to Self: Essays’ by Emilie Pine, Irish Book of the Year 2018 and the No.1 Bestseller, is published by Tramp Press. 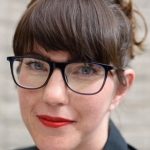 Emilie Pine is Associate Professor of Modern Drama at the School of English, Drama and Film, University College Dublin. Emilie has published widely as an academic and critic. Notes to Self is her first collection of personal essays.