An Ambulance by Ric Carter

An ambulance pulled to a stop outside the building first thing, as people were arriving into work, just before the work would begin. Its siren was switched off, its motor kept running and there the ambulance remained, trembling in anticipation by the pavement. You could see that the people going into the other offices were all rubbernecking to see what was going on or what was going to be going on.

Everyone wanted the ambulance to be not for them. Someone started a sweepstake. Someone started a conversation: when was the last time you had to go to hospital? When they made hot drinks they did so carefully, wary of the scald, cautious of the trip and smash. They swivelled round on their swivel chairs, so they were all facing one another, and speculated.

The ambulance had been called as a hoax or a joke or by mistake. Or they had the wrong address — someone had repeated it incorrectly to the operator, or the driver had driven to the incorrect place. Or, or. Or they had received an anonymous tip-off — something was going to happen. Someone was going to injure themselves or someone was going to injure someone else. Or the ambulance drivers were bunking off, pretending to attend a pretend emergency. Or it wasn’t even a real ambulance but a fake ambulance being used in a bank robbery or a stakeout.

They took turns to look out of the window to check it hadn’t gone away.

It was always still there.

They had not in such a long time felt so much like tiny models of people being lit up in a tiny model building. 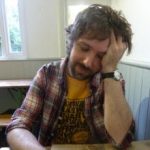 Originally from Bury, Ric Carter lives in Guernsey. He has written hundreds of short stories, some of which he has published at https://digestivepress.wordpress.com. He has been shortlisted for the Bristol Prize and the Fish Prize and is currently working on a short novel.