A pale winter light is seeping through the curtains. It turns the dust into grey snow on the fields of the wardrobe and dressing table, curving the corners of the gilt frames and softening the ridges of the picture rail.

Mary cannot tell whether it is early morning or late afternoon. The time on the clock does not help her and all she can do is watch for the room to darken or take colour. The furniture sits silent. The house waits.

She inches her hand out from under the sheet to touch the dust on her bedside table. It is gentle and kind and familiar, the ghost of old velvet, the softness of the past. Hush, it whispers, hush hush.

Her body has become autumn leaves to be kicked and blown about… Ssshhh says the dust, ssssssshhhhhh. It stills her mind. The noise from downstairs stops and she remembers the girl who comes after it. It is tea, but that’s not how her name starts. Her name is crisp and then turns into glitter. Bible female, Christ, Christmas, Jesus, Jessica?

The girl appears at the door with a tray and cups but her face isn’t familiar.

“Hello Mary,” the girl says loudly, “I’ve made the tea just the way you like it.”

“What does that do?” says the girl.

“Who?” says Mary, distracted by the dust that is shifting out the way as the girl puts the tea things down and straightens the bed covers.

Her voice comes back to Mary now, the strange flat accent, the sideways pull of her mouth when she says ‘fast’, ‘daft’, ‘laugh’. She puts the tray on the bed and perches next to it. Mary watches her take the lid off the pot and check the tea. The steam curls up into the air like a question mark. She puts the lid back on.

“You are using the teapot,” says Mary. “The other one said it was broken.”

The girl rests the strainer on the tea cup. There is a saucer that matches. Mary smiles at the girl. The girl pours the tea before the milk

“What are you doing?” says Mary.

“Polishing elephants,” says the girl. She hands Mary her cup and saucer, which rattle and spill.

“Oh dear,” the girl says, “have you had a bad night? It’s bath day today – do you think that would help?” Her mouth does the thing with the ‘a’ sound. She picks up one of the framed photographs next to Mary’s bed.

The dust weighs them down, makes them easier to touch.

She looks at it now along the windowsill and sees one of her brothers sitting cutting his nails, sees both of them leaning with cigarettes against the fireplace, at the dining table glinting with the crystal, in the hallway getting ready to leave. Mary brush brush brushing hairs so carelessly from their coats to the floor. Leaving part of them behind. Making dust. The older one blowing a kiss to her from the door… where did it go when it fell from the air, caught in the curtains or on to a cushion. Her teeth press an F on to her lip for… Forget… Fall… Forgive. But no name comes.

“I haven’t heard from them in such a long time,” Mary says. “Have you written to Freddy?”

“What like a carp?” Elsie laughs making her mouth open and shut O, O, O.

“It was you Elsie,” Mary says angrily. “You were always sweet on him, getting above your station – sending message…” Oh… her mind slips and splashes into the cup of tea she didn’t know she was holding,

because this isn’t Elsie,

“Are you alright?” the girl asks taking the tea away and getting up to open the curtains. They are big and dark and the light makes Mary squint.

“How dare you call me by my first name,” Mary shouts. “Who do you think you are?”

She says ‘who’ again but the winter sun is shining in now, making the dust dance like diamonds in the air… Mary forgets her sore hands and claps them with joy.

How lovely. She moves them forward, sending the dust whirling with a whoosh into a waltz… And for a while she is not upset because she is twirling with it, spinning round and round like she used to with her brothers when she wasn’t autumn but spring.

Christina watches Mary waving both hands at the middle of the room, head tilting back and forth, and wishes she could peek in through her ear to see what goes on in there. She looks so happy. Her eyes are sparkling. Her cheeks seem flushed, which could actually be the beginning of pneumonia. She gets out the thermometer and Mary opens her mouth like a baby bird. Her temperature is normal. Maybe she just needs to be taken to the lav.

Mary doesn’t hear her, she keeps on swaying in her chair as if she is being spun around the room Christine thinks, stopping to watch her again. She’d like to be spun around a room or just taken anywhere but the pub.

“We can’t dance during lunch,” says Christine, “we don’t want to spill the soup while attempting the…” she tries to find a step that the old lady will understand, “…cha cha.”

“I should think not,” she says. “Whoever heard of such a thing?”

Christina carries the tea tray back down to the kitchen. When she is old she will live in a haze of weed and wine and die before she gets that helpless. Her steps creak on the stairs and tip tap over the tiles in the kitchen. She has never known a house be so loud in its silence. The echoes of her yawns are like roars.

Opening the kitchen window wide, she shimmies up on to the edge and hangs out of it, fishing in her pockets for her lighter, feet hooked on the radiator to stop her from falling. She can’t find a key to the back door but doesn’t much fancy standing in the freezing cold for a ciggie anyway.

There’s a noise from upstairs and she ducks her head inside. The worst thing would be a fall on her watch. If she could she would fill all old people’s houses with pillows piled at least three deep everywhere. Though here, maybe the dust would catch Mary’s fall it is so thick. When she first started she found mummified mice and the brittle bodies of spiders hidden under a shroud of the stuff. Scuttle marks too.

She shudders and stubs the cigarette out on the brick and then runs it under the tap to make sure it is really out before chucking it in the bin. The worst thing would be the house burning down, Mary on the front of the local newspaper, Christina, page 5, slightly blurred coming out of court. She takes a can of soup from the cupboard and a pan from the drying rack and goes back to the bin just to double check the butt isn’t smouldering.

The wet pan hisses against the electric rings. The house is so quiet every sound is amplified. She butters the bread and sets the tray with a glass of water. The pills tinkle onto the plate as she counts them out, making a pile for before and a pile for after food.

There are too many medications for such a delicate old lady, the dust can’t be helping. There must be years and years of it in Mary’s room, getting in her lungs. The worse thing would be her dying from a dirty house. A simple chest infection. It would be so sad and is so easily solved. Christina regularly changes the sheets but Mary gets besides herself, to the point of tears, if she tries to open the window or polish a surface.

She scoured the downstairs rooms to within an inch of their life when she started, waiting until Mary napped to tackle the dining room and living room, climbing chairs to get to the top of the bookshelves and reaching deep inside the guts of the grandfather clock. Everywhere was thick with dust, years of it built up like some kind of nuclear fallout blanketing the rooms.

All those human hairs caught in the upholstery over the years, eyelashes in the cracks on the windowsills, sweat soaked into the banisters, dry skin drifting. All those pieces of people, lives mixed together, the last remains and little scraps of the dead still here in the dust.

She gloop gloops the soup into the bowl. Perhaps if she could leave Mary in the bath for a little while she could air the room out properly. It can’t be good for her, it can’t be healthy and she is such a nice old lady. A quick vacuum with the extension cord and a whizz round with a bottle of disinfectant and she could get rid of all traces and have her room clean and sparkling, just like new again. 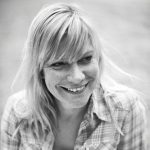 George(ina) Parker is studying an MA in Creative Writing at Birkbeck and works as Head of Content for an international animal charity in charge of all written and visual storytelling. She took part in the Autumn 2019 MIRLive with a shorter version of this story.