A Stream Runs Through Us By Jess Sturman-Coombs

He threw his arm around her, pulling her in for a kiss. His face cold against hers, his breathing quick. She could feel the heat as it rose from inside the collar of his hooded jumper, bringing with it the labouring smell of him: a thick mixture of beautiful grimness. The kiss was hard against her lips. It wasn’t passionate, but it was love. It was gratefulness, happiness, an attempt at…something.

“Trust me, Kate,” he told her. “I’ll have this place feeling like home in no time”.

“Not like that you won’t!” They turned to see the old gentleman who lived upstream. “Gravel? There? Waste a bloody time! Get washed away quicker than you can shovel it!” They looked at the grey pebbles they were hoping to park their car on and watched as the water bubbled up, creating a shallow stream headed for the road. “Can’t change the course a water.”

She sighed. Mark hugged her tighter with his right arm, swiping the other across his face to catch the drips. Shrugging inside her chunky cardigan, sucking up moisture by the second, she cast her mind back.

“I’ve been thinking,” he’d suddenly declared. She’d stopped packing her gym kit to look up at him. He sounded different this time. She’d zipped up her bag and put it on the floor, moving to take its place on the chair. That’s when he’d said it: “My job. All of this. It’s killing me.”

So here they were. Autumn had been and gone, strong winds leaving behind a carnage of wooden limbs. One had just missed the car, which they had decided to park in a new spot. Except, it was now slowly turning into a lively spring. Probably the same spring that supplied the well, and only water supply, out back. The one she had refused to drink from, which would have been fine had the nearest supermarket not been fifteen miles away on a road so serpent-like the journey there took well over thirty minutes.

She dipped to extricate herself from his embrace and wearily made her way to the front door of what had once been described as, ‘a quanit little, stone built cottage, in need of some TLC’.

Inside was no better. It was dark, cold, and eerily still. A tomb of a building, the ribcage of a dinosaur, and she longed for central heating, sleek blinds that you could see your face in and a hot dead takeaway. There was no such thing here, unless you classed a flapping, stricken fish from the stream as convenient. She didn’t.

They had ordered a double glazed door and drove it two hundred miles to get it on site. “Won’t fit!” the old man had hollered as he walked his dog. They had attempted to replace the kitchen with something high gloss, but it took a wall down with it. “She won’t give up without a fight!” he’d laughed from outside, puffing away on his pipe. Kate had pulled the dusty curtains on him and gone back to filling buckets of rubble. She had nearly fallen off the ladder when he barked, “That’s what’s holding it together!” as she tugged at the last piece of ivy, gripping on to the window with it’s tiny little millipede feet.

Now they were loose and the chill crept through, reaching into her bones and plucking at her nerves like a toddler with a guitar. She ached. From her head to her toes she ached. She ached like her inner self was rusting bronze and tight.

“Can’t use that city stuff on the walls ‘ere. Needs to breathe!” he’d told her as she ferried tins from the boot to the lobby. She’d smiled politely and days later they were leaving a dusting of white powder on the cramp-cold quarry tiled floor. When she brushed up against them and ruined her best jeans, she had gone to bed and vowed never to get back up again.

Then the tiredness set in. Her legs, weak, shook beneath her weight and Mark had to support her to the bathroom in the middle of the night.

The old man dropped off some logs and urged Mark to make a fire. Said coal was no good. “She provides everything you need,” he told him knowingly, pointing outside. Mark stocked the great hole under a judgemental eye, and coaxed heat and afterlife into the wedges of seasoned forest fuel. The old man banged out his pipe and threw the sweet remnants into the ashes.

“She wants to come in,” he said, gesturing with his mouthpiece towards the firmly shut window.

He looked her up and down and nodded. “Them spiders were ‘ere before you,” he smirked.

She pulled up her knees, hugging the blanket against a thinning body that she no longer recognised.

After a pause he spoke again. “This house likes you.”

“No it doesn’t!” she protested bitterly. “It hates us!” She fought back tears. “It’s hated us from the moment we moved in! Everything’s been a battle!”

“Life is a battle. Where there’s nature, where there’s humans, there’ll be conflict. But there’s also middle ground.”

Her eyes were growing weary and heavy against the heat of the fire and his words had become a rippling lull; a warm stream washing over her.

“I’m getting a doctor out in the morning,” she heard Mark say. Mark didn’t believe in doctors…unless someone was dying.

The old man laughed, “She needs a doctor about as much as I need a cooker.”

“It’s like that road out there,” he went on, ignoring Mark. “Goes two ways. Defeat. Or compromise. Your wife needs to make peace. Lay down arms, as it were. Make sure she stays warm.”

She heard a door close far off in the distance and felt herself floating as Mark lifted and placed her in front of a beating fire.

The next morning the coughing wracked at her delicate torso, her lungs thin windows in the frames of her chest. Laid on the ground like a fallen leaf, one ear pressed to the floor, she listened in to the soft and irregular thud beneath, bringing with it a deep sadness; the fading echo of something dear passing over, whispering its final bequeath. A voice lingering in the ear, a victim to the passing of time.

He took her pulse and listened to her heart, all with a furrowed brow. “Goodness,” he exclaimed, turning to warm his soft hands over the fire, “It’s colder in here than it is out there!”

Kate rose to her feet on wobbly legs and caught a glimpse of herself in the window. She too looked like a doctor in her white, knee-length dressing gown; she smiled at the irony, reaching to pick up the stethoscope and putting it round her neck. She was distracted.  She looked closer. The ivy had managed the impossible and, against all odds, found a place to sprout again, reaching inside slowly and gently, like a plaster pulling the split sides of a wound back together again and masking the scars. Keep the fussers from upset.

She moved closer and lifted the latch, throwing the windows wide. The doctor was right, warm sunshine poured in, chased by a gentle breeze which tugged needily at her fine, brittle hair like an inquisitive child. She breathed in deep, filling her lungs, like the birds singing in the eaves.

Turning her back on the outside, she stared for a long moment at the four walls surrounding her, stepping forward once, twice, three times. She stopped when she was within touching distance and reached for the stethoscope resting against her breast. She pressed it to the wall and heard a gasp so pitifully painful, so desperately deep, that the walls groaned and the space constricted around her. She jumped back suddenly, the equipment swinging like a pendulum beneath her chin.

She looked from the doctor to Mark and then to the ivy loyally staking its natural claim, and finally to the place where she had lain in front of the fire. Where she had learned what it was to face another woman’s mortality, to listen to a mother slowly leave behind that which she alone had created.

“A truce,” she declared, daring to feel a skip of hope in the hollow of her chest. She lifted the instrument to the wall again. 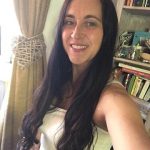 Jess Sturman-Coombs is in her final year of the MA in Creative Writing at Birkbeck. She’s also a content writer, has self published a number of novels, is a qualified teacher and creates and runs writing projects in schools. She LOVES social media: Twitter @JessSturman. Fecebook: @JessSturmanCoombs.