In her final MIR16 post, Elizabeth Lovatt reflects on the end of one journey and the long road still ahead

When we first started thinking about issue 16 of the Mechanics Institute Review, which you can now hold in your hands, it felt like there was never a more timely subject. That feeling has not gone away; just this week I watched in horror as two Extinction Rebellion protestors were pulled from the top of a train and beaten by angry commuters. While XR’s protesting methods certainly require some scrutiny there can be no doubt that they have caught the public’s attention and the reactions to them are extreme. Much like the praise and vitriol aimed at Greta Thunberg, it demonstrates the polarised times we’re living in. For those commuters that vitriol is grossly misplaced: defending the neoliberal system that has left them broken and precariously placed. There are no easy answers.

Climate change, as Rob Nixon has noted, is a kind of “slow violence”, one that creeps upon us and spans lifetimes. And yet, it feels like that speed has rapidly increased. It’s no longer a destruction that seems far off but one well within our lifespan. As Thunberg said in her address to the United Nations climate change summit, “You have stolen my dreams and my childhood with your empty words.” And while we hail Thunberg as an icon, a queen, an inspiration we must not miss the truth of her words: that we, the “grown-ups”, have failed the next generation and left them with a broken world. Our response next is what matters.

There is violence and stolen dreams in our anthology. There are certainly broken worlds. There is also hope. I’m not saying this anthology is going to change the world (I would very much like it to) but what it is, is a reflection of our current time: the anxieties that fill it and the voices that speak up in the face of catastrophe. It is a challenge to the slow violence that threatens to overwhelm and subsume us. As Julia Bell wrote in her introduction to the anthology, “This issue is a hedge against loss, an opportunity for a conversation, an invitation to think, to engage, to participate, not just with fear and grief, but with hope and humour too. With lyric and character and description and story — with language; it’s all we’ve got.” 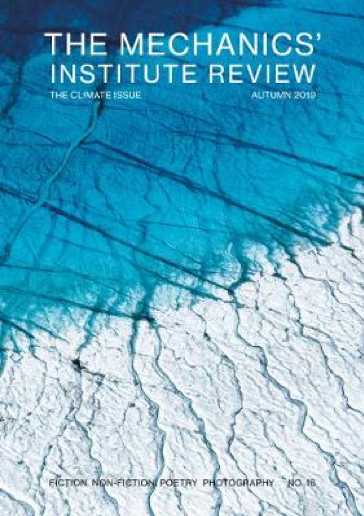 The anthology is now out in the world and available to buy through Waterstones or ordered through your local bookshop. It is a beautiful object, having been designed by Mark Cortes Favis who oversees the publishing programme at the Design Museum and, luckily, is also a student at Birkbeck. The new issue feels weighty: brimming with ideas and images to illustrate each story. It has a new look and a new feel: a climate all of its own with which to communicate its words and images.

Myself and the whole editorial team have worked incredibly hard to bring it into being, alongside our brilliant bunch of writers, many of whom were able to join us at the launch and later at MIR Live to perform their work. It was wonderful to be able to gather in one space at the launch to see and hear so many different voices from around the UK speaking on the subject of climate and the many forms it took in this anthology. A chance to celebrate but also to reflect on the process of curating these voices into a singular object.

Throughout the process we have been led steadily and surely by Sue Tyley, our editor-in-chief. We are all in her debt. The vision and direction of the anthology was masterminded by Julia Bell, who ensured we were always thinking clearly and carefully about what the anthology was going to be. And, as our work on creating MIR 16 comes to an end, so too does this behind-the-scenes blog. So I will add my final thanks to Lyndsey Garrett, who has dutifully edited this blog, sorting out my grammar and always been extremely kind and generous with her encouragement. And thank you also to Peter Coles and the MIR Online team for their support.

I hope these blogs have been interesting and have shown you a little of what it’s like working on a literary anthology. In short: hard, important work, but not as hard and important as the work we need to do to save this planet. Thank you for reading.