Hannah Copley on writing, teaching and the multiplicity of a writer’s life.

Hannah Copley will defend the right of poets to also be active on Instagram, perhaps even to gain a majority of their readership this way.

I wanted to ask her opinion on “Instagram-poets” (a cohort of writers who have shared and found publication through posting work on social media) early in our conversation. The topic has sparked debate, some upset that the trend has elevated poets who haven’t yet earnt their stripes, others insistent that social media has brought new and more varied poetry audiences.

All this I wanted to discuss at the beginning but Hannah’s warmth and openness on a freezing evening we met in a busy cafe near Tottenham Court Road, meant our conversation meandered from talk about childhoods, writing schedules and the affliction of imposter syndrome. It’s clear she has a deep interest in other people and their stories, something I suspect makes her an excellent tutor in her recently appointed role as an associate lecturer for poetry at Birkbeck and a lecturer in creative writing at the University of Westminster.

But back to Instagram. Copley is disdainful of the “hugely gendered” discrediting of writers who have gained readers and popularity through social media and lists many of the Insta-poets has her contemporary favourites, including Hera Lindsay Bird and Warsan Shire. Hannah firmly believes that anything that brings people to poetry is fine by her. “Poetry is a broad church,” she confirms. “(Just like) in music we have different genres; jazz, rap, pop. Poetry is the same.” There are poets she appreciates and others she doesn’t, men, women, pre- and post- social media. Yet she would never take away their right to write poetry and to call themselves or to be called, poets.

It’s this acceptance and passion for diversity in poetry and publishing that makes Hannah such a good match with Birkbeck, where she has been teaching on MA and BA courses since last September. The talent of her students often blows her away and is inspired by the people she teaches, many who have come to poetry and writing later in life. She feels proud to teach at institutions which foster the talent and interests of people from a variety of backgrounds.

Hannah herself would not say she grew up in an especially creative household, although she was never without a book. Growing up in Hertfordshire with her mum, a chef, Hannah’s reading was passionately encouraged and her support has been one of the strongest influences on Hannah’s life. That and her grandparents, who she stayed with often as a child and who both were avid readers. Recently Hannah came upon a box of limericks she had composed with her grandad when she was little, an example of the pleasure Hannah found in words and poetry at such an early age.

She became a mother herself two years ago. Her young daughter is also now a source of inspiration and keeps Hannah motivated to work and write. “I want to be creative for her,” she tells me, hinting that perhaps she would like to be as strong and supportive for her daughter, as her mum was for her.

Hannah lives with her daughter and partner, a history teacher and writer, in Hertfordshire where she grew up. I tentatively ask how she manages to balance child-care and employment and writing, knowing full well the gender bias affixed to this question so often thrown at working women who appear to be “doing too much.”

“I’m better when I’m working,” she states. Her classes are often in the evenings, which can be hard with a young child, but she still finds it utterly satisfying that she gets to write and teach for a living. “It’s a luxury,” she assures me. She also uses her time more wisely now that she has less of it. Before having a child, the lack of demands on her time meant she was more likely to waste it, whereas her current schedule means she has to make the most of every moment and is, therefore, putting it to better use.

It’s clear Hannah’s family and her writing brings her equal joy. However, it seems to have come after an unsettled time, in which Hannah lost her job and suffered acute sickness throughout her pregnancy. Although Hannah was not surprised when she had to leave teaching when she became pregnant, a standard practice in academia, she didn’t realise just how hard a transition it would be, or how deeply she’d miss it. Her sickness also meant she couldn’t write, so didn’t for a long time. The isolation of pregnancy and her inability to work meant she often envisaged a life going on somewhere without her.

Again, her mother and her partner pushed her to carry on, along with Hannah’s obvious dedication and steely inner strength. It was during this difficult time that Hannah produced one of her favourite poems, “Haworth, 1855” which went on to win the York Literature Festival / YorkMix Poetry Competition. It is one of the poems she feels most proud of and has inspired her to begin a project exploring other people’s experiences with sickness during pregnancy. She’s already begun scouring through archives (“and some pretty outdated medical journals”) for stories and accounts of morning sickness, and has been reaching out to others to come forward and share their stories.

Hannah writes often about women and the body, but also trauma and the effect of violence. Her PhD at the University of Leeds focused on three 20th century poets, and their connections to each other, to the war and the Holocaust. She still teaches her students Geoffrey Hill, Tony Harrison and Jon Silkin and cites her exposure to these poets as a great turning point in her life.

Her route to poetry wasn’t always straight forward. Hannah had initially opted to study for an MA in Medieval History, but after writing a “Sylvia Plath style” poem and entering it into a university competition, one of her lecturers “saw past the pastiche” and invited her to attend a poetry group. Hannah felt like a fish out of water but this formative experience also exposed her to a great many writers and poets she would never have discovered otherwise. Her induction into a community of poets came during a period of, she now realises, unhappiness, with her father falling ill, and her questioning whether to continue studying.

She was asked to help edit Stand, a poetry magazine published out of Leeds, and after she took up this opportunity “that was it”. Being in a generous environment with people willing to read her work and offer feedback nurtured Hannah’s writing and provided support during her father’s illness and eventual death.

Hannah now shares her work regularly with a small but trusted group of Stand editors, friends and writers. She doesn’t share much with her mum, although she’ll definitely be in the audience of the next poetry event or reading. And Hannah isn’t even sure if the rest of her family even knows she writes.

This seems to suit Hannah just fine. She is writing and working, after a short hiatus, to be the best she can be, for her partner, her child, her mum, for her students, for herself and for us.

The question of how someone can be a mother, a writer, a breadwinner, and a woman is so often asked rhetorically, as of this was a feat too great for one woman to achieve alone. Yet it’s this multiplicity that Hannah has found in her life, and also what makes great writers. It’s being multifaceted that helps us identify with other people, other ideas, other stories, other ways of being. As I leave Hannah in the cafe to make her notes and look at some books in the shop, I wonder if it’s not such a hard stretch of the imagination, to consider that a person can be both a creator of people and a creator of writing. 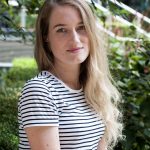 Hannah Copley is a writer, lecturer and reader. In 2018 she won the YorkMix/York Literature Festival Poetry Prize for her poem ‘Haworth, 1855’, a piece that explores morning sickness and the final days of Charlotte Bronte. Her work has been highly commended in the 2015/16 Faber New Poets Prize, and the 2017 Hippocrates Prize. She works as a Lecturer in Creative Writing at the University of Westminster and as an Associate Lecturer in poetry at Birkbeck. She is the poetry editor of MIR16. Hannah and regularly writes about her research and teaching, as well as about motherhood and creativity on her blog https://hannahcopley.wordpress.com She also tweets @hcopley

Miller is Features Editor for MIR online. Her fiction has been shortlisted for the Bridport Prize and published in Mechanics Institute Review 13 and Spread The Word’s City of Stories anthology. She has a BA from Central Saint Martins and an MA in Creative Writing from Birkbeck. Follow her on twitter @LMillerwrite