Here I am, a 54-year-old woman from Horsforth in West Yorkshire, in a basement, below a grubby Chinese restaurant, in New York, giving a massage, to Harvey Weinstein.

It’s all one business, the restaurant and the massage place, owned by Samantha. That’s not her Chinese name. Samantha says Harvey has been coming here ever since 1987. Whenever he’s in the Lower East Side he drops by. And tonight he’s got me, pushing my fingertips into the clay of his back.

I’ve tried to cover the smell of the restaurant that infects this basement. But my sandalwood incense has nothing against Samantha’s pork. It’s really good, apparently, the pork, according to Juno, my daughter, who eats it six days a week before her show. She lives in one of the flats, ‘apartments’, above the Chinese.

It feels like I’m earning good money, but it’s all in dollars. Nice to earn my own though. I always thought I could do it. Samantha said she thought the “Horsforth International School of Massage Therapy in England” sounded good, so she took me on, and I thought it sounded good too, for something I said on the spot.

Juno’s dad never wanted me to have a job, but now I’m free of him, the shithead. Free to come and be here for Juno during her first show on Broadway. Juno said “sure” when I suggested coming over for a couple of months. She said, “if you want”. She said I could have my “own adventure”. And here we are, me and my daughter Juno, our stories glued together in a basement in Chinatown.

Harvey’s shoulders are a sack of spuds.

Juno doesn’t know I’m giving Harvey Weinstein a massage. And Harvey doesn’t know that I am the mum of Juno, one of the girls, those eager girls who auditioned for him, just once, one of the girls he felt up. You touched my daughter and you promised she would reach her dreams, you stinking toerag, I want to say.

Living upstairs is how our Juno knows Samantha, how she got me the job when I came over. If I have a job then I can stay a bit longer, with my daughter. That’d be nice. I like the food. I have discovered Mexican. There’s a place I like for burritos, round the corner from here. Juicy and spicy, all rolled up warm and tight like a fat person in a sleeping bag. We don’t have anything like burritos in Horsforth.

Juno would be mortified to know that here I am, with Harvey Weinstein beneath me. But it’s gone 7:30, so she is on stage, in the theatre off Times Square, Samantha’s pork inside her while she jiggles about. I watched the show, she got me a free ticket, and it reminded me of her jiggling about in front of the TV when she was little. That little precious girl — always the star. Always the light even when her dad made us all dark.

Harvey flinches. Oops, sorry. I say it trying not to sound too English.

I shift position and feel some bubbles inside. Nothing too much, just my stomach working through the beans and hot sauce in the burrito from earlier. I am sure Harvey eats in much fancier places, even if he does come here for a massage. New York is full of them. $30 for a main. I’ve seen $50. More!

That’s the kind of life Jim’s dad said he could get for us. He just needed to keep playing, and he’d win big one day, and then he wouldn’t be so angry anymore. I spent the best part of 25 years on that dream of a meal in Manhattan. But Juno will get there, and she’ll pull out a seat for me, her old mum.

Of course Harvey is used to fancy food — I know it because one day he turned up to a film set in London that our Juno was working on. And he ordered his own food delivery. It came on a motorbike, not a normal takeaway service, a very private one for posh food. Juno saw someone sign for it and take it up to him. But that’s not when Harvey touched her. Harvey touched her in a hotel room, with no one else around.

Juno was working as an extra in the background. She met him when he visited, on the last day, when they’d all finished the filming. The director and Harvey offered booze to everyone, even Juno, even though she wasn’t the star or anything. Juno told me everything about working on that film — it was her first big one, but she was just in the background.

I always love her stories, all the people she meets, I need the colour in my life. So when she told me she turned down another job working close to all them actors and producers and directors, I said she was a total plonker. I said, I guess you’re not serious about getting to Hollywood.

So she told me about Harvey. She didn’t take that job because she didn’t want to have to say no again. I’m so proud of her being strong and independent. She doesn’t need this man, here, these legs I’m sliding my hands up and down, clamped like vices, up and down again. And up again, to—

I think that’s where Harvey touched our Juno. On the bum. Harvey knew that Juno wanted to do proper roles, not just in the background, and they got talking at that party, and she went to meet him in his hotel the next day. She told him all about her acting classes, squeezing them around her other shifts, auditioning for all sorts. She made those awful short films, where they only paid her for her Tube fare.

She told me she got used to it, like the touching. She’s always been a looker, Juno. I remember people touching her when she was really little — everyone wanted to feel her curls, all lovely and normal, of course. That’s what people do, isn’t it?

There’s a big poster of her now, outside the theatre, lights at the top, somebody’s words printed over her chest, her face shining with laughter. It’s the only scene in the whole show where somebody laughs. That’s my Juno. People will want to touch that poster, too.

Holding in these bubbles is starting to hurt. I don’t think it’s anything wrong, just a little bit of a kerfuffle inside my tummy. Harvey won’t be able to hear it. But god knows what he’s thinking about. Samantha upstairs? Samantha’s pork? Maybe these new women who’ve said things against him?

He’s groaning more softly now. It’s my massage — I think I’m good at it. I could push harder. I could cause an injury, saying it was a mistake. You’re a mistake, I want to say.

It’s hard, showbusiness. I know what Juno’s career has taken out of her. Her eyes explode when she tells you about what she’s working on next, bigger than the last thing — and now Broadway! — and always keen to remind you of the hard work, the late nights, the endless rehearsals, the rejections, always the rejections. It’s so hard. That’s why I said I’d come, so I can take her out sometimes, girls having cocktails in the afternoon. Make it a bit easier for her.

Ah, that feels so much better. Woah. Harvey’s head just twitched, like the smell had overcome Samantha’s pork and wormed into his nostrils.

Harvey tries to sit up a little, but I push him down and finish pounding him. We’re locked in, in my thick beany soup.

I don’t want his tip. 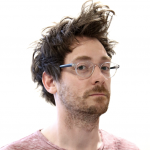 Adam is writing a novel, supported by the London Writers Awards development programme run by Spread the Word. His stories have appeared in Wasafiri, Ways of Falling and Smoke. His show Stigma, with the performer Luis Amália, played at DT Espacio Escénico in Madrid and will play at the Camden People’s Theatre in March 2020. His podcast tells a history of LGBTQ+ life in the UK since 1974 and it is called The Log Books. He in on Twitter @AdamZmith.