Hikaru and the Whale by Adam Forrest

There once was an old priest named Hikaru. He lived in a shack at the end of a jetty running out into the sea. Sea lions bobbed in the water under his wooden home. He played solitaire. He cooked fish. He looked out of his window at the sunlight flickering on the water.

The people of the island all knew Hikaru was the priest, but they had forgotten why. There was no-one old enough to remember how he had become one. Hikaru had nothing to offer the people by way of rituals or readings or blessings or anything like that. He wore no robes. He had no books. He hardly even came into town to say hello.

But the old man offered good advice. If anyone was worried or in trouble, they would take some fresh fish to Hikaru. He would yawn and pull up his white vest, scratch his big belly and say, “Okay, what seems to be your trouble?” He would cook the tasty fish and listen, then tell them what to do.

The people of the island were worried. It had been too hot to grow anything on the island for many, many years. The paddy fields had dried out long ago, long before anyone could remember. The never-ending summer had wiped their memories. Nobody knew if the wild plants might be edible. They experimented with dandelion and thistle leaves, but some of them got sick. Without the tasty fish everyone became hungry and tired and irritable.

They took their problems to Hikaru, but the old priest was not happy. They had no fish for him. He sent them home without answers, scratching at his empty belly, moaning about the fisherman and their empty nets. “What the hell are those boys doing out there? Huh? Those stupid schlumps better catch something soon or there’s going to be hell to pay.”

The days passed. No fish. People began to bang on the door of Osamu, the leader of the island’s government, and demanded action. They thought Osamu was a sensible man. They wanted a sensible plan. Osamu gathered up Ryu, the young fishing boat captain, and brought all the people of the town together for a showdown.

One of the older ladies stood up to speak first. She was weak with hunger. “Well Osamu, what I want to know is, what in the world are we going to do? Huh? We’re in a real tight spot here.”

The people were puzzled. It had been a long time since anyone had thought about communicating with the other islands. The old machines had not been working for many, many years. It had gotten too hot and all the machinery had turn to rust.

Ryu, the captain of the fishing boat fleet, decided to speak to Hikaru. He walked out to the shack at the end of the jetty, listening to the sea lions whining as they bobbed in the water. They were hungry too. Ryu opened the door to find the old man staring out across the great blue sea.

“They want me to go looking for help,” the young man said.

“A whale? What whale? Where? Osamu thinks we should make contact with the other islands again, find some other people, get some help.”

“There is no help. There’s no-one out there. Forget it. Forget about Osamu. He’s a useless schlump. You listen to me. You hustle up the boys and you get out there and start looking for that whale, you hear?”

Ryu hustled up the fishermen and he told them what the priest had said. They thought the old man had gone crazy, but they were too weak and hungry to argue. They readied the fishing vessel and set sail.

Ryu was tired and hungry. He gripped the mast and drifted into sleep. He felt the huge empty sea heave and groan below him, pulling him down like an almighty magnet, dragging him into the deep sands below. But just as he felt himself falling to the ocean floor, there came a thud of a thrown oar and a cry from one of the fishermen.

Ryu awoke to the sight of the great whale. He watched it arch gracefully over the waves and spurt water high in the air before slipping gently under the surface, leaving a long line of white foam in its wake.

The men readied their harpoons. The whale moved slowly, and so the boat came closer and closer and closer upon it, until the tail was rising and falling before them, throwing water across their faces. One by one the roped harpoons were darted. One by one each spearhead pierced the side of the creature. The ropes held. There was no struggle. The men pulled the whale to the surface and tied chains around the small of the tail. Slowly they dragged it back towards the island.

Hikaru sat up when he saw the boat on the horizon, pulling a huge whale back into the bay. He came outside and ran along his jetty, whistling and waving towards the town.

The people of the town stepped outside. They were tired and weak. They watched in silence as the men pulled the whale from the bay up onto the beach and dumped it there. Everyone gathered around it and collapsed to the ground.

Osamu stood up and cleared his throat. “Boys, this is wonderful. This will keep our bellies full for many days. There’s the oil to use, also. I think there’s something in the archives about how the whale should be cut up correctly –”

“Shut up,” said Hikaru. “Shut up and sit down. Now you people listen to me, and you listen good. There’s more work to be done. We have to drag this thing up to the volcano, you hear? We have to take it up there and push it down into the goddamn hole.”

The people were puzzled. “Up there? Up into the volcano? What in the hell…”

“Shut up! Shut the hell up, all of you,” Hikaru shouted. “Now quit your whining and do what I say.”

Ryu was exhausted. He pleaded quietly. “But why Hikaru? Why should we do as you say? It don’t make no sense.”

Hikaru hopped right up onto the back of the whale. The people were puzzled by the old man’s energy.

“You people have forgotten a lot of things. I think your minds have gone soft in the sun. You’ve forgotten how to do things properly when the time comes. I’m the only one who remembers. Just listen to me and get this goddamn thing up into the volcano.”

The people of the island looked down at the swirling red abyss. Smoke filled the air. They looked back at Hikaru, who was hopping around.

“Into the goddamn hole! Go on!”

They pushed the dead beast into the belly of the great volcano. It crashed down into the red molten rocks and bubbled as it disappeared under the lava. There came an almighty rumble. The island shook. The people kneeled, bowing and weeping, waiting for the end to come. But the end did not come.

The rumble faded. Silence fell over the island again.

Slowly, one by one, the people of the town picked themselves up off the hillside. As they dusted themselves down and wiped at their faces, they realised Hikaru was nowhere to be seen. There was no-one to give instructions. Silently, they began wandering back down towards the town.

Then they heard the cries of the boys and girls who had run ahead.

And sure enough, a huge school of fish could be seen dashing around in the shallows.

There was Hikaru too, there at the end of his jetty, down on his hands and knees, catching fish in a bucket. Fish were leaping out of the sea. The sea lions were squealing with delight. Hikaru waved and shouted.

After they had all eaten, Ryu and his men set sail for more. They returned, day after day, with nets full of fish. 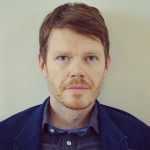 Adam Forrest is an award-winning journalist, writing feature stories for The Guardian, The Independent, Vice and other publications. He lives and works in London.