The term Insta-poetry is causing quite the stir in the literary world. It is no new term, but it is a persistent one that divides the purists and modernists amongst us. Rosie Arrowsmith reviews its divisive rise.

There have been dozens of exploratory pieces on the subject, but none quite as impactful as a piece published in the PNR by Rebecca Watts in 2018 titled ‘The cult of the noble amateur’.  The title alone sets out Watts’ stance, but she highlights that these poets create “the open denigration of intellectual engagement and rejection of craft”. For better or worse, this article brought us face to face with the elephant in the room. Poetry is decorated in snobbery.

Among other things, the piece claimed that the likes of Rupi Kaur (seller of over 5 million copies of her debut poetry collection and counting) and Hollie McNish are driving consumer driven content by sharing their work on Instagram. And claims “If we are to foster the kind of intelligent critical culture required to combat the effects of populism in politics, we must stop celebrating amateurism and ignorance in our poetry.” Having worked in the media industry for the majority of my career and being somewhat of a novice poetry consumer myself, I find this statement entirely reductive. The majority of young people in the UK interact with Instagram on a daily basis. What they are interacting with can of course, be debated way beyond this piece however surely a platform that connects people to new work can only be a good thing. Is poetry as a popular medium such a bad thing?

Academic and Poet, Hannah Copley doesn’t think so. “Audiences are gaining access to poetry, it’s a gateway to find new work.” Editors and agents alike also look to the platform for up and coming talent but dig further and it can be a cynical business, hunting for people with millions of followers rather than looking for the good work. This is where Watts and I agree, just because someone has millions of followers it doesn’t mean that they are artful poets. Copley continues “Ultimately the readers that get it at the end aren’t cynical. All popular fiction picks up on what is going to sell, poetry doesn’t sell so this is a brand-new cynicism that poetry isn’t used to because it doesn’t make money and this does, it’s suddenly more like fiction.”

Arguably Beyonce has done a lot for bringing poetry into the mainstream. Yes, I said that. Warsan Shire catapulted into the spotlight after her work featured on her Lemonade album in 2016. Shire is from a stable of talent who merge the image and words. Something that would have been considered radical before the age of social media is now popular because we have the tools to share it.

As a latecomer to poetry myself, it feels like one of the last romantic art forms which is still reserved for the middle and upper classes, like Opera or a rare piece of Renaissance. A sense that its beauty must only be preserved for those who can truly understand and appreciate it, however poetry has always been a literary form which has struggled to sell and been impossible to make a living from. It is surprising then that Watts cannot see the value in a platform like Instagram to promote women in this field. Copley hesitates, “It’s almost a dangerous subject to talk about it, I’m an advocate for it, but it’s not really my taste. I would defend their right to do it, it’s just not for everyone.”

So who is consuming poetry on Instagram if not academics and poets? According to Nielsen, In January 2019 figures showed poetry sales at an all-time high, with two thirds of buyers under the age of 34. In 2018 1.3 million volumes of poetry were sold in the UK, a 12 per cent increase and record-breaking year. Whatever the naysayers have to say, it is impossible to deny the positive impact social media has had on bringing new poets to the fore. Young women aged 13 to 24 are now the biggest consumers of poetry in the UK in a market that has grown by 48% over the past five years. An audience that would have been impossible to connect with before the platform which allows young people to consume, like and share easily. Charly Cox recently commented in an article with the Guardian “A lot of the poets who are coming from online platforms are women or people of colour, and I think that has unsettled the very traditional, predominantly white, older male community, who have spent so long feeling that poetry is an incredibly exclusive academic club. Well, it’s not any more. Suddenly, it’s being blown open,”

It is almost impossible to avoid the issue of gender and marginalised communities here. And why would we? Poetry is thriving here. The article in the PNR was written by a woman and references women. In an area of literature that has always been dominated by discussing the male experience through the likes of Wordsworth and Coleridge, isn’t it time we celebrated the female experience?

Kirsty Melville who published Rupi Kaur’s work commented at London Book Fair “Rupi connects with her readers in an extraordinarily personal way; her work empowers, inspires, restores hope. She has forged an international community of passionately engaged readers who enthusiastically await her work”. To have garnered an international community of followers is no mean feat. Her work almost transcends the genre and speaks more widely to the female experience, self-care and wellness.

“There has always been identity politics. It just happened to be the white male identity. Now we’re talking about menstruation and babies, its womanhood in a different way and it’s threatening and scary for people.” She continues “confessional poets, female poet – there is always a prefix. You’re kind of a poet, half a poet, half an Instagrammer. These aren’t women’s issues, these aren’t BAME issues. These are issues. There is snobbery around it.”

These are the next generation of consumers and poets that will drive the medium forward. There are also other ways that poetry is changing, particularly for women. Lucy Thyne, a 17 year old award winning poet recently commented in the Guardian: “Poetry doesn’t just express ideas, it’s a vehicle for political messages. Post #MeToo and #TimesUp, we can look to female poets as militant figures.”

Women are now empowered to take centre stage. Copley says “There are new and exciting presses opening up ran by women. Women have previously done all the hard work, the admin the editorials and the men were the editors, but now women are inviting work that they want to read.”

Editing agencies and publishing agencies are also now actively looking for writers from different cultures and different backgrounds. It has effectively cut out the middle man- publishing has become more democratic. Copley continues “Behind the scenes, there are also these other quite radical and really exciting changes. There’s a much stronger female network”.

With all the positives that the platform has brought to poetry, there are inevitably some downfalls. The first is that Instagram doesn’t have editors. Copley says “There are no gatekeepers. It’s scary for writers and poets because it’s a completely level playing field and also the rules are entirely different. It’s a brave new world out there.” This can, of course, be a huge benefit to writers that feel they won’t be discovered through the traditional avenues of publishing; however it can also leave them exposed without a chance to re-edit the work.

Journalist Pandora Sykes recently commented on her weekly podcast that she has taken the decision to remove her personal poetry from the platform when discussing intrinsic actions vs extrinsic ones. “It can feel quite exposing when you put your work out there, it can frame the way your work is written in a way it wouldn’t offline. I stopped putting my poetry on Instagram because I immediately encountered what I knew would become a larger frustration, people messaging me saying I like your Insta-poetry. It’s not Insta-poetry, I’ve written poetry and I have shared it on the medium of Instagram. I realised I wasn’t happy with the externalisation of that and it’s better to do it for those intrinsic reasons which had lead me to write it in the first place.”

Instagram gives poetry a face, it exposes the person behind the work in a world where we are all desperate to understand more about the people around us. It’s not always for the better though and can open people up to a different kind of scrutiny, an objectification, an ugliness that can thrive on social media. Copley comments “To me if I put it on there, it’s lost to me. I find it odd that Instagram owns my words but I then can’t redraft the work. Maybe it’s the old-fashioned poet in me. I believe in the book.”

The medium is also fragmentary, they often become visual pieces with a word limit which fits in a 1 x 1 square, they don’t have that linearity. Copley says “I don’t know whether it suits all types of poetry. But just like there are so many types of music there can be many types of poetry and it doesn’t have to be everyone’s taste.”

And lastly Copley adds: “In the social media world where we are becoming increasingly binary in opinion, I think it can only be a positive thing to have more and more viewpoints on life experience, particularly through poetry which was frankly losing appeal and needing a shake-up. It’s a self-fulfilling cycle. It’s exciting and it’s fresh. Poetry and the platform of Instagram are ultimately supporting one and other. It’s a different, instant world.” 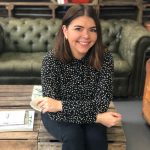 Rosie Arrowsmith is currently studying the Creative Writing MA at Birkbeck. She is an aspiring novelist and writes lifestyle content for her own blog https://www.thereclist.space/