Writing as a Non-Native English Speaker by Angèle Eliane

It’s hard to explain the feeling of wrong-doing in my gut whenever the incorrect word or sentence leaves my mouth as I watch helplessly, unable to stop it, like an out of body experience. English sometimes feels heavy to me. Some grammar simply does not roll off my tongue. It’s not about a learning curve but more about my need for English to morph into a language I can fully grasp as a recollection of my own mother tongue. I want English to represent me but structure often gets in the way. On other occasions it feels natural: a lot of the deepest conversations I’ve had with friends have been in English. I don’t think I could go into this much detail about ho I feel in french, probably out of prudishness. English has often felt like coming back home after a long time spent abroad, setting foot into familiar territory. It’s thinking, speaking, reading, overthinking, overreacting, loving, fucking, crying in English for the four years that I’ve been living in the UK. Since then I’ve often felt like a stranger in my own country as I get off the plane and hear the familiar French intonations coming from the mouths of the border control agents. Anecdotical interactions can feel awkward after a while. It’s easy to feel misplaced when you have to navigate between what sometimes seems to be different identities. Writing in English has felt about the same. It has more emotional background but lacks the immediacy connected to my native language. You can think words in English over and over in your head but they might never sound right. Some sentences often only sound poetic in your head. The harder you try to sound smart, the worse you writing gets. The words have to come naturally, and it took me some time to learn to spill my guts on the paper. Creative non-fiction cut me and my writing wide open, revealing what I was unconsciously concealing.

English didn’t come to me; I didn’t go looking for English. I never thought I would write in this language and often wake up with the nasty self-doubt that I’m doing it all wrong. My writing comes from a place of modesty. My main concern has always been making sense to others. I’ve found my way towards English with inexplicable quirks. Most people see it, but I don’t. It’s been described as my voice. I always wonder what it would be like to pick into a native’s brain, read my work and see what it sounds like. I don’t have a magical power yet and from where I stand, my writing shows as blunt and unpolished. It’s the way I taught myself how to write. There’s a scar in the middle of my brain: the fear of not being understood. Of course, I am able to make friends, to work and live in this country, to create indestructible bonds with others but what if I wasn’t able to bond with readers? Less and less, I believe this thought to have to do with being a writer in general, but instead of not being born with English as a first language.

English reconciled me with writing. Before moving to London, I spent two years without putting a word down on the paper. I was well on my way to nowhere. I gave up after my grandfather’s death, the one who owned books he didn’t have the energy nor time to read when he worked in the fields as a young man but still passed them onto me as I was growing up. Writing felt shallow. His passing away shattered my creativity. The strings of my words tangled themselves together. I stopped caring. After that, the thought of being a writer never even crossed my mind. I’m grateful that I moved to London and lived with struggling artists who made me believe that there was a possibility to do what I loved, as hard as it gets, as defeated and rejected as you can sometimes feel. They taught me that I didn’t have to be in a job which I didn’t like that much. I could be someone else.

I didn’t come to English; English didn’t come to me. I sought it as the old friend sitting on the side of my brain, ready to jump at an opportunity which I hadn’t caught up with yet. The first drafts were not worth it, and yet someone on the Birkbeck admissions board read them and saw a courage I wasn’t sure I was ready to muster. I was scared of the critics, dreading the natives in the room when we had our first workshop. I’ve made my peace with it. We’re all in the same boat when it comes down to creativity, natives or not.

Lately, I’ve felt like I’ve been losing the thread of my mother tongue. I make it sound wrong. I read a sentence out loud to find there’s a ring to it which does not sound quite right; there’s a mistake which I have made, one that I am unable to spot when rereading the page unless someone points it out for me. I have no passport to prove my creative identity. I used to be self-conscious about an accent. I hated every minute of people telling me how French I was. I can’t hide it in my writing either but I have learnt to be ok with it. That doesn’t make me less of a writer. Writing in French has now ironically become a struggle. The words don’t come so easily. I’m scared of losing the ability to string a sentence together. I will never lose the language completely but the poetic aspect of it doesn’t seem to fit anymore.

I started writing in English with no pretension. I came from a place of learning. I never pretended to be a writer. Every writer, native or non-native has to endure this. We have yet to find the remedy to treat every mark we get from being rejected. It stings but I’ve been learning patience and kindness towards myself, making sure that writing comes from a place of fulfillment and not obligation. When I’m losing the thread, I try to focus on the feedback I’ve gathered from my English writings, my successes instead of my failures. At the corner of my head, I make myself think into my own language. At work, I interact with French and English people. My brain performs the switch. It’s peaceful to stop for a moment and realise that all day you have been thinking in English. The writing flows from there, thoughts become word and one day, perhaps, I will write again in French. For now, I follow the thread which has been putting itself together in my head.  One day, I will write in both languages, again. 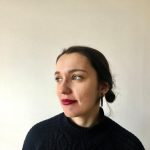