When I was lucky enough to find myself pregnant with a wonderful baby girl, I had forty weeks, to think about the narratives present in my reality that I wanted to pass on to my little one and others that I didn’t.

The main story I didn’t care to perpetuate is the one that goes:

“I was artistic before you came along but once I had you, things had to change. There was no time, and the person I used to be was left behind, forever. I had to choose between being your mother and following my dreams.”

These are the tales I grew up with and still hear around me to this day. They are heavy burdens to put onto a child’s tiny shoulders. I might as well make her a t-shirt that says: “It’s my fault Mummy didn’t win the Nobel Prize for Literature” and get her to wear it for every photo we take from now until she comes of age, because If you’re going to blame someone for your dreams not coming true you might as well tell the world you had some big ass dreams.

I would like her to look forward to becoming an adult and make choices, such as becoming a mother or not, based on positive experiences and her own beliefs rather than trying to run away from the “mistakes” I made.

I want to empower this new person and lead by example. Not just tell her that she should follow her passions, but show her that regardless of what I may or may not achieve, I made the effort to follow my dreams and be creative as well as being her Mum.

After taking a year out of my two-year Creative Writing MA, I found myself back at University with a ten-month-old at home. I juggled writing deadlines, jabs, fevers, sleepless nights, course reading and, on many occasions, teething.

However, time pressure breeds resourcefulness. I found ways of making sure I did the work ahead of time. Reading was done during feeding times. My daughter would snuggle up in my arms and one hand would present the all-important milk bottle while the other hand held up the essay or short story or novel that needed to be read. If she slept, I would put her into her bed and sneak out of the room (making sure to step over the floorboard that creaks and always wakes her up) to make notes or compile feedback on my laptop. If she didn’t sleep, more reading would happen during her next bottle.

Writing is a different story. I needed to ensure that I made time for it once the baby slept “for the night”. As most new mothers know this sleep could last a couple of hours or all night, or she could decide to wake up at three in the morning and not sleep again until she saw the first light of dawn.

My writing had to happen in two-hour bursts. I don’t have endless days and weeks to work on my stories and that’s something I just had to accept and let go of the shame I felt when telling someone how little I actually write. I decided that if my little one might be waking up at two or three o’clock in the morning for another bottle, two hours plus some sleep would keep me sane and keep me going.

However, what my lovely daughter and my University have helped me learn is that I can give myself the gifts of consistency and discipline. It is through this well-harnessed time I have experienced a joy in writing that I did not know before.

Like Aesop’s tortoise, off I went, slow and steady. No matter how tired I was I would go into the box room we have turned into an office with a strong cup of tea, wake myself up, put on whatever music the piece I was writing was prompting me to listen to (with earphones of course) and lose myself in the story whilst watching my daughter sleep on the baby-cam. The desk faces out towards one of the largest windows in the house so I’ve done a fair bit of cloud watching during my two hour bursts over the last year, which I believe is essential when trying to compose an original thought.

After a stretch of not writing during the first few months post my daughter’s birth, these two hours an evening became a way of meeting myself again.

“You’re here. Thank God! I wasn’t sure I would find you,” I thought, during one of the early sessions. Like meeting a friend I hadn’t seen for a while.

The atmosphere in the space I use, to write in, became exciting. I couldn’t wait to meet myself again every evening and find out where the story would go, how specific characters might develop or if there was a twist coming. It felt like an adventure and all I had to do was go to our box room and turn on my laptop.

And thus that old story I grew up with changed. If she asks one day I will now be able to tell her:

“I was artistic before you came along but once I had you, things changed. My need to write became more immediate, I wanted to make myself into someone you could be proud of. You helped me learn the importance of discipline and consistency. I discovered I didn’t have to choose between becoming a Mother and following my dreams. I’m not in charge of the outcome but if I make time and keep trying I have as good a chance as anyone else of achieving them.”

The reality is that becoming a Mother has changed certain aspects of who I am, forever. I had to make a decision about what I wanted to hold on to and what I was happy to let go of.

I could let go of the care-free girl and the selfish girl and even that vain girl I used to be, but I was certain I wanted to hold on to the creative girl and let her be part of this new person that is lucky enough to be called Mum/Mother/Mammy/Mamaka/Arhondia. 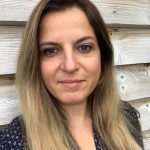 Arhondia is a Greek-Irish writer. Growing up in Athens sparked a love for theatre and storytelling. Having moved to Ireland after completing school she studied theatre at the Conservatory of Music and Drama (DIT) in Dublin and storytelling in pubs all across the country. She worked as an actor and producer in multiple Dublin theatre venues. Arhondia completed her MA in Creative writing at Birkbeck in 2018. Her short story Tom Corridan is published in MIR15.