Our July MIRLive was our Folk Tale Festival; an exciting evening of folklore and music. We were entertained by the winners of the MIR folk tale competition, plus our wonderful headliner Catherine Menon and were treated to music from the irrepressible Bity Booker. 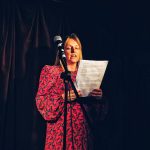 Our very own Tabitha Potts kicked off the evening with her intriguing tale, ‘Crow Girl’. This was the story of a vulnerable girl whose life initially seems marred by her crow-like qualities. Abused by a priest, she is created into a social pariah whose fledgling child is taken from her. Ultimately, the crows wreak their revenge and the child is returned to the crow lady she has become. The story was evocative and well-devised, expertly taking the reader through the narrative to a satisfying ending. 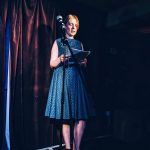 Sian Hughes’ story ‘Is My Name,’ told the tale of a mermaid called Shona who ventures onto land to recreate her identity as a human. The innocence of the protagonist exposed the weaknesses and the immorality of the human world. Most effective was the depiction of the affectionate relationship between the charity shop assistant Deborah and naive Shona. The story was pleasingly conveyed, with a lightness of touch. 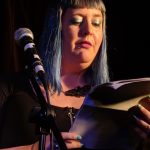 Katie Young’s folk tale ‘Lavender Tea’ was a sinister story about a wise woman and her daughter. Katie’s description of a village steeped in the traditions of Midsummer’s Eve, a time of rollicking abandonment, feasting and dancing was very effective. Risk is not just associated with traditional games, like jumping the bonfire, but with malevolent spirits who might take advantage of the young, if potions are not drunk to ward them off. Despite her mother’s attempts to protect her, Mary is raped by the Oat King and has to abort the Sutekin but we are left with the image of her picking poisonous plants and a sense of her strength and resilience. Again, women must prevail against male threats. 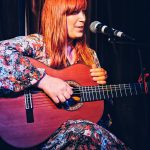 After the break, we were treated to three folk songs by Bity Booker. Bity’s soaring, melodic singing voice was belied by the softness of her spoken introductions and the gentle, rhythmical chords of her guitar. We were invited to join in with her ‘mouse song’ and were highly entertained by all three songs, not least by the absurdities of the juxtapositions in her lyrics and the humour she evoked through her pure voice and wide-eyed animated delivery. The connection she had with the audience made her performance one of the highlights of the evening.

🔊 You can listen to Bity’s music by going to: bitybooker.com 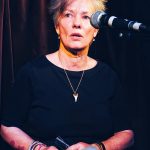 Following Bity we were delighted to listen to the overall winner of the folktale competition, Gilli Fryzer, who read her story, ‘Corn Running’. This was the only story of the evening that concentrated on a specific event and a limited period of time. The tradition of corn running was fully conveyed through all the senses. We were transported to a rustic other world where men chased hares down with scythes and the heat, tension and danger was dramatic and fast-paced, culminating in the horror of the final twist in the tale. Gilli’s descriptive language was vivid, rich and innovative and her story-telling cast its spell most effectively! 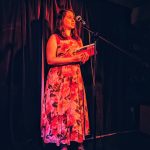 Finally, we were delighted to hear Catherine Menon read from her published book of short stories, ‘Subjunctive Moods,’ from which she took her story, ‘Foxgloves.’ Catherine commented on the recurring themes of renewal and revival that had been addressed during the evening, but through her story she wanted to ask the question, where does folklore go when it dies? Her story was beautifully structured and poignantly evoked the life of a young girl, Tracey who is damaged and unable to cope with parenthood. Plagued by Sandra the social worker, who was wonderfully conveyed, the story moved beyond the parochial by conveying Tracey’s anxieties through surreal references to witches and goblins. Eerily, Sandra visits with something from the mountains scuttling behind her, something which watches Tracey from behind the cabinet. Although Tracey re-invents a fantasy world where her child has escaped foster care and lives in a magical haven, she also, at one point, sees herself insightfully, as a malevolent witch. There were many moments of humour but overall, this was a tragic story of loss and longing which was expertly told.

📖 Read more of Catherine’s short stories by going to: cgmenon.com

All the talent displayed meant that this was certainly a night to remember! We hope you will join us at The Harrison for the next MIRLive which will be a Mechanics Institute Review Special!