October’s MIRLive was a marvellous showcasing of several talented authors from the sixteenth issue of The Mechanics’ Institute Review anthology. This year’s issue is particularly exciting and relevant, as all submissions revolved around the theme “Climate”. Far from limiting the content, it has instead created greater diversity. The anthology pulsates with powerful poetry, prose and photography. 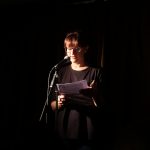 In the softly lit basement bar of the Harrison, a packed audience listened eagerly to nine expert readers perform their work. First to take to the stage was Alexandra Petropoulos, whose story “Tree of Life TM” was an imaginative, futuristic tale of life after death. The story took the form of a dramatic monologue in which we are told that donating one’s body to help combat climate change has had unforeseen consequences. Regeneration, as a tree, delivers surprising beauty, tranquillity and hope; yet, this is dashed by the destructive actions of man. 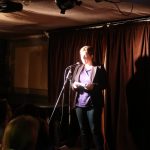 Arhondia’s gentle reading from her story “Walnut Shells” was touching. The story, set in Athens, was told from the perspective of young Sophia, who faints from hunger at school. As the story unfolds, problems of climate change and the economic crisis are seen to have a direct impact on Sophia and her brother. Their innocence and naivety are lost as the reality of their situation is revealed. Ultimately, Sophia cannot escape the anger and impotence of those around her, not even in her dreams. 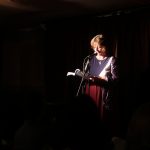 Carol Caffrey’s poem “Cillini” was beautifully read, extremely evocative and moving. The poem commemorated the lives of the “unshriven”, the vulnerable social pariahs whose lives were intended to be forgotten. The indignant tone of the rhetorical question conveyed the poet’s outrage at the brutal “tandem burials” of mothers and babies. The poignant call to “Feather them down” into “the grace of remembrance” effectively evoked pathos.

We shifted a gear from poetry to creative non-fiction when Valentine Carter took to the mic with an extract from “Now the Rivers No Longer Meet the Seas”. She recounted her experience of travelling in Tunisia in 2010-11 and meeting an aspiring student who gave her insight into his life. The piece was written with warmth, gentle humour, and authentic descriptive detail. Expertly, Valentine moved between the personal and the informative and her piece became more serious and thought-provoking as she conveyed the devastating effects of climate change on farmers and fruit sellers. 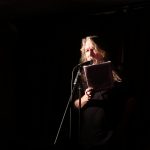 Dave Wakely’s fictional piece “Visitor Notes: Acacia Lodge” was a highly effective, satirical dystopian warning. The story was written in the factual tone of a guide book to a heritage property, last updated in 2051 and offering insight into the early twentieth century, known retrospectively as “The Age of Excess”. An entertaining and energetically read piece, it both amused and disturbed the audience. The contrasts between “then” and “now” indicated a traumatic breakdown in civilised society, followed by the emergence of an oppressive state-led regime. The detached tone of the “educational” narrative made it all the more chilling. 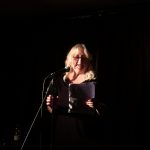 Having been fortified by various beverages from the bar during the break, we were immediately rapt by Carmel Shortall’s historical piece, set in Ireland during The Troubles. An extract from “The Short Cut” was expertly read and effectively documented the climate of anxious, turbulent times from a child’s perspective. The rich description and the authentic dialect made this an engaging story which left the audience wanting to hear more. 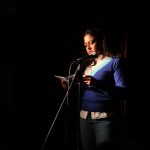 This was followed by further dystopian fiction. Reena Dennhardt’s story “Better People” was compelling from the outset. Set in an Orwellian future, the protagonist is forced to become “an informal informer”, who infiltrates the lives of her neighbours. Under the guise of kindness, her actions insidiously allow the state to take control. It was a gripping story, well told. 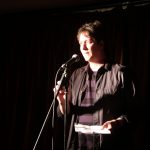 Next, M.W. Bewick read his poem “The Force of a Leaf”, which effectively suggested the significance of nature and man’s destructive relationship with it. Bewick evokes the delicacy of the leaf but immediately subverts this through the metaphor of the leaf as an iron gate resisting man’s advances. A sense of our guilt is clear in the final lines, “Force yourself upon this leaf, / it will mark your hands / red as blood”. 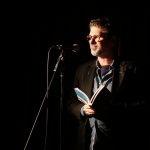 Finally, Andrew Leach read from his highly entertaining story “Boom Babies”, a satirical piece evoking the horror of wildfires raging across the world, “spreading out like a virus”. Astrid Cramer, torn between her husband and her lover, is disillusioned with a world under threat from the melting of the polar ice caps and an uncle whose politics she despises. The skilfully crafted narrative switched between pronouns, moving from ironic detachment to an informal first-person style which gave the reading pace and humour.

The whole evening brought the concept of “Climate” sharply into focus. As Julia Bell defines it, climate, in these pieces, reflects “the ideological, political, sociological, emotional atmosphere in which we all live and breathe” and which is “under pressure from human pollution”. Each of the readers provided their own version of this in what was a vibrant and inspiring evening, fluently MC’d by Elizabeth Lovatt, one of the MIR16 editorial team.

Come along to our next exciting MIRLive on December 2nd at the Harrison. Join the audience or submit your own work in order to be selected to read on stage alongside our headliner. We are delighted to be hosting Toby Litt, who will be reading from his latest novel, Patience.