Captain Maitland picks up the heavy volume anyway, flicks through the pages. ‘I didn’t know you read French,’ he says, waving the book.

‘Why do you always have to touch?’ asks Rieux. He watches Maitland with narrowed eyes. ‘It was Mariette’s. Please, Captain, put it down.’

‘No need to be so formal, Bernard.’

They look at one another for a moment, Rieux standing quite still. Placing it back on the table with exaggerated care, Maitland turns to check the artificial cave. Even now, stripped of much of the furniture and equipment that had been there, it is a comfortable billet. Warm. Dry. A commanding view.

‘This should all be packed by now.’

It is already an old argument. They don’t pursue it. Rieux flaps a hand toward the bottles and turns back to the window. Maitland pours a drink. He sips, looking at some of the other books on the table. Poe, Camus, Defoe, Bradbury, London, Márquez, Čapek. The names mean nothing to him.

The silver ships had burned through the atmosphere as they landed and left a vortex of storms in their wake. Deep red light from the setting sun under-lit the vast, slate-purple thunder stacks. When the rain came, it bounced noisily from the cooling hulls and drenched the landing ground, obscuring the surrounding forest. Pools and runnels formed, draining into the swollen river that washed fiercely against the cliffs on its far side.

They sat inside the craft for several days watching their screens, peering through ports. The clouds slowly lost their darkness and took on a greenish hue that gradually faded to a sickly yellow. Eventually, the rain stopped.

‘She thought it was inhabited.’

‘There’s no proof for that.’

‘You know there is.’

Maitland joins Rieux at the window. This, too, is an old argument. They stare at the livid landscape, dark clouds once more massing on the far horizon.

‘You know what this place was like when we first landed,’ continues Rieux. Maitland refuses to be drawn.

‘You wanted to see me, Captain?’

‘Ah, Dr Rieux. Bernard. Nothing urgent. One of the survey teams has a minor casualty; possible broken leg. They’ll be back tomorrow morning. Just wanted to let you know.’

Rieux nodded. On the far side of the landing area, a shuttle took off for the starship in orbit. He turned to watch as the bright needle of flame lit up the evening, casting dark shadows across the scrub. Withered trees seemed to cower.

Maitland checked his watch. ‘Will you and your good lady be dining with the exec tonight?’

‘Hmm? Sorry. No. Mariette’s busy on the site across the river. I’m taking some food across.’

‘Oh. OK. Do you think all that work’s worth it for a few caves?’

‘Well, what are the odds? Evidence of occupation so close to a randomly chosen landing site.’

Maitland shrugged, toying with a pad. ‘We’ve had teams complete 247 surveys over the last six months and they’ve found nothing.’

They looked at each other across the map table.

‘Not our job,’ said Maitland refusing to be drawn. ‘There were no signs of anything but basic animal life. So we survey for possible settlement sites. How’s your work going? Any interesting bugs out there?’

‘What am I going to tell them?’ asks Maitland.

‘Tell them what you like. Tell them I’m dead. I probably will be by the time they hear.’

The Captain swings round, trying to read Rieux’s expression. ‘Simple as that?’

Rieux finishes his drink, pulls his gaze away from the orange glare of the desert, with its litter of dead trees. ‘All right, then. Tell them I’m finishing Mariette’s work.’

The cave complex sat behind the cliff face in many layers. There was evidence of centuries of use. Crude tool marks had given way to finer cutting. Rough shaped chambers and passages following natural fissures and caves had led to straight tunnels and complex geometry.

And then there was the highest cave, the one they called the viewing room, where Bernard and Mariette Rieux had set up camp. Cut from granite beneath a sheltering overhang, a vast sheet of glass formed one wall, with entrancing views across the river, the landing ground, and the forests beyond.

Rieux sat watching the sun set. ‘I must get out there tomorrow and see what is causing the pseudofoliorum to change colour. Can’t be seasonal because—’

Something hit the floor with a crack.

‘Are you all right?’ he asked, turning in his chair.

Mariette bent and picked up the recorder. ‘Tired,’ she said as she straightened.

‘Come and sit down.’ He tapped the other chair. ‘You’ve been hard at it all day.’

She looked at the pile of work on the table. Sighed.

‘There’s so much to record.’ But she sat, taking the drink he offered.

She gazed out through the window, not seeing the view.

‘You don’t look well.’ He leaned across and took her wrist, counting silently.

‘Well take it easy. None of this is going to go away.’

‘She was the only one who really cared.’

Maitland glances at the countdown on his watch and returns to keeping an eye on the brewing storm. ‘A bit harsh on all the others.’

‘And not one of them concerned about the people who lived here.’

Maitland shakes his head with an inward sigh.

‘Who may still have been here,’ continues Rieux, ‘before we made this.’ He nods toward the window and the scene of desolation beyond. ‘And it was Mariette the planet killed.’

She lay pale in restless sleep, her hand on the book she had long since abandoned. Her veins were dark against the papery flesh that lay tight across the bones beneath.

There was nothing left to do. The diagnostic machines stood silent in the shadows at the back of the room, the computer was switched off, notes littered his desk. Rieux had discovered so much. He had not discovered enough. Weary, he sat at the bedside and stared at her face, despairing at how thoroughly the lively smile and gently mocking eyes had withered away. Leaning forward, he took her hand in his.

‘Bernie?’ She did not open her eyes and the voice was a dry whisper.

‘Mariette.’ A single word, a song of love and loss.

As the room slipped into darkness, flickers of light from a distant storm danced briefly before the shadows returned.

‘You did what you could, doctor.’

‘Wherever I find it.’

‘And sometimes, it wins.’

Even when he dug down to the rich silt of the old riverbank, orange sand kept running down the sides of the grave in rivulets. Neat piles formed in the base, darkening as they absorbed moisture from the surrounding soil. Sand flies danced in the air in front of his face.

Rieux manoeuvred the small digger away from the hole, attached the cradle to the bucket, and lifted the coffin.

It should have been a stormy sky above her beloved Pointe du Raz with Rachmaninoff’s Isle of the Dead as a soundtrack. Sweeping the flies away from his face, he pushed his foot on the pedal and the digger growled monotonously through the shimmering heat haze. From the shadow of a distant red rock, Maitland watched unmoving. No one else had come.

The storm sucks light from the horizon, lightning flickering in the evening sky.

‘There are six stages to a fatal disease.’ Rieux’s voice is remote, as if reciting an old lesson.

‘The first stage is where the pathogen enters the body.’

Maitland frowns. ‘What are you talking about?’

‘We don’t know it’s happening. Where it is coming from. It could be airborne, or via dermal absorption.’

Rieux continues to stare through the window. ‘You don’t have time.’

Maitland pulls on his gloves, holds out his right hand, but Rieux does not notice.

‘We destroyed this place. Infected it. Sickened it. Killed it.’ He turns, but Maitland is no longer there.

He looks for a while at his home, the place where he will die; pours another drink and settles himself in one of the chairs.

The sun-bleached evening sky is fading to night. Stars begin to appear, pale sparks against the growing fury of the approaching electrical storm. Perhaps there will be rain.

Rieux sees Maitland’s transport skim across the riverbed and up the opposite slope, trailing dust that lingers in a hazy cloud. Later, he watches the last shuttle ride its needle of light into the dark. Much later, long after the storm has passed, dry and violent, the night sky erupts as the star drive is switched on. No turning back. Not now.

Tired to his very bones, Rieux levers himself out of his chair. Pulling on medical gloves and a mask, he lifts the book from the table where Maitland has left it and places it in a container, sealing the lid with care.

‘There are six stages to a fatal disease,’ he says quietly. ‘The first is where the pathogen enters the body. We don’t know it’s happening, where it’s coming from.’ He sighs. ‘The air we breathe.’ Returning to the chair, he sits and waits for the dawn. ‘The things we touch.’ 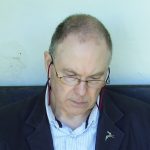 Graeme K Talboys was born in London. He writes. That’s punishment enough. He currently lives in Scotland with his wife, two cats, and five million Scots. His agent is Leslie Gardener of Artellus.