Wildfowl on the Water, July, and A Game of Chess

Wildfowl on the Water

shelter in the far corner under a sycamore.

Cormorants perch on sunken logs in the middle of the lake

as the first of the migratory wild geese gather together.

A female swan calls to her brood across the water.

The signets preen themselves, halving their bodies into the water, loosening feathers.

Little white gulls with soft black tipped wings swoop and dive for fish in the lake.

dressed in camouflage unloading guns from their car. Morning, the older one nods

but it is meant as a warning. I leave them to their sport, and walk home past the concrete

onwards past the farmer’s field freshly ploughed, where four magpies

congregate in the middle of the farmer’s freshly ploughed field.

July the hottest on record. The pansies

are wilting in their planters and the strawberries

shrivel in their borders, despite futile attempts to give them water.

The lawn is parched to a yellow sunburnt crisp.

to drink from the blocked guttering

gargling the water greedily in their throats.

We cycle to Durham City in the heat

stopping by a cherry tree to fill a bait box

with black to bursting ripe cherries.

The juice stains my hands and fingers red.

You say it is just as well

we did not go away on holiday this year,

imagine all the midges by the lake

A Game of Chess

It is the beginning of the holiday

with their purple butterfly wings.

We lie to the children, tell them the pieces are hand-carved

from walrus ivory and whale tooth.

stand on Salisbury Crags, we do not hold hands.

The sea stretches out for miles under a curdled buttermilk sky

and our children squabble over whose turn

it is to hold the camera. They take pictures

of the not so happy couple.

It is harder climbing up the hills

than climbing down. Neither of us speak.

The sky is blue and endless,

so that the walrus ivory and whale tooth do not break. 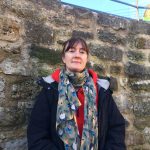