The Reluctant Commentator by Kavita A. Jindal

Kavita A. Jindal discusses the influence of politics on her writing. 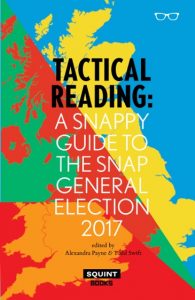 It’s not often that my writing life, fiercely compartmentalized, coincides with my real life.

Yet in May this year it did, and I’m not sure if this serendipity is charming or alarming.

I’ve just completed a political novel set in India in the late 1990s: at the cusp of the twenty-first century and the dawn of the digital age.

The announcement of a snap general election and the local events that followed it bizarrely echoed plot-lines in my novel. How strange is this? My novel’s narrative unfolds in a different era and a different country, yet in my neck of the woods, here in Greater London, themes and events could be right out of my book. I should be struggling with writing a better synopsis and getting organised to pitch my fiction to agents instead of being completely distracted and writing a non-fiction polemic.

I’ve contributed an essay to ‘Tactical Reading: A Snappy Guide to the Snap Election’ which was put together in a flash, pretty much, by Squint Books. My essay is on Zac Goldsmith and his Political Flip Flops. It also tackles, at length, his leaflet campaign aimed at “British Indians” in the last London Mayoral election.

I don’t write political non-fiction. I mean, I didn’t. I must learn to use the past tense on that. I’m usually happy to have discussions in private, hear and learn from disparate views, keep my opinions to myself, and keep my public profiles steadfastly neutral. Yet, when I was offered this opportunity to contribute, I couldn’t turn it down. It had already dawned on me that some parts of my novel were playing out in front of me. Scenarios that were fun to write in fiction and that I’d written, in draft form, years ago, were actually happening. Instead of amusing me, they were making me mad. My outrage, which took me by surprise, compelled me to write that essay.

In my novel, one of the main characters, W, stands for election as an “Independent” candidate, but she is backed by the same party that supported her in a previous election bid. That’s one obvious parallel. In the book, three general elections take place in India in the space of three years – a ‘waste of the country’s resources’ as one character bemoans. A tumultuous time-span in a novel set in the past is reflected in current times by the UK population going to the polls three times in three years (once for the EU referendum). Another theme of my book is the interconnectedness of wealth and politics. The second main character, M, is the scion of an industrial dynasty. One of the questions I play with in the novel is: What should he do with his mammoth means? What route will give him satisfaction? Will investing in politics?

At first I began writing my non-fiction piece on the fact that in Richmond Park, our local ‘Independent’ candidate remained independent for four months only. I collect election leaflets (don’t ask, and yes, I have a storage problem) and so I dug out the previous year’s missives, some addressed directly to me. These were from the London mayoral campaign in 2016, and at the time, they’d really got my goat. I was reading them again, almost disbelievingly, and my dismay at their contents made it into the essay.

It has struck me that we must all be contradictory people, having to make peace with our paradoxes. In my compartmentalized writing life I am a full-on cynic. My characters have freedom to deploy dirty tricks when they need to, especially if others do the same against them first. My characters want to win at any cost, even if it leads to tragedy. My characters start with idealism, then turn to the dark side.

In real life, and especially in the case of London, I want my local politicians to stick to some of their principles. I know they need to be pragmatic, and I realise that all politicians have to compromise to achieve certain goals, but I don’t want them to treat their constituents like they’re all feather-brained. I want, no, I demand, credibility.

A version of this blog was first posted in May 2017 on www.kavitajindal.com

‘Tactical Reading: A Snappy Guide to the Snap General Election 2017’ may be somewhat out of date as we are in the post-election period. However, it’s still an engaging read, not least because the authors wrote what they did in the face of the expected ‘landslide’. They spoke out (in their varied voices and political alignments) against the oncoming wave, urging measured and tactical thought.

No one predicted that our country would be reeling in chaos that the snap election was supposedly meant to avoid. But even now, measured and tactical thinking appears lacking in our dealings with the nations that make up Britain, Europe and the world.

‘Tactical Reading’ is available at Waterstones, independent bookshops and online. It is edited by Alexandra Payne and Todd Swift and is a ‘Squint Books’ edition published by Eyewear Publishing.