The Carousel of Progress by Richard Roper

Welcome to Walt Disney’s “Carousel of Progress”. Ah, you’re in for a real treat!

I sit in our kitchen on my upholstered wooden rocking-chair, paralysed from the waist down. I’m wearing a mustard yellow waistcoat with a red cravat underneath the velvet dinner jacket, and I’ve got my pipe in one hand and the day’s paper in the other. The heat from the spotlights never gives way, softly broiling my skin until it’s as sallow and weathered as a parsnip. I pretend the heat’s coming from our brand-new iron-cast stove, and imagine Mother baking biscuits or frying corn fritters on the skillet – if my mouth could water, it would. The wooden racks are fit to burst with empty jars labelled as jams, preserves, chutneys, and Virginia mixed pickle. Someone’s pulled the net curtains above the sink and I’ve just about got a view of the threadbare clothes hanging to dry in the garden, though I’ll never make it outside. My pal Rover lies faithfully at his master’s feet. He’s a good ol’ boy; only moves to wag his tail, only barks when it’s about to rain.

Shining at the end of every day,

I’m singing as the new folk revolve into the room – I stay in one place and the audience is brought in on long benches facing up at me. I’m not half-bad at carrying a tune, and most of them are kind and gentle enough to ignore my palsied face. I can’t do much to stop my hands from jittering and jerking up and down, but I keep a good hard claw on the paper and pipe and don’t ever let them go. As the music dies down, the room fills with birdsong and I say, like always,

“Huh, it looks like the robins are getting ready to celebrate Valentine’s Day today. What year is it? Oh, right around the turn of the century. And believe me, things couldn’t be any better than they are today. Yes, sir.”

I’m the first Father they meet, so it’s my job to set the scene and introduce them to the wonders of Progress. I boast about our new stove, ice box, gas lamps, and the water pump we have right here in the kitchen – no more trips to the well. While I’m yammering on, the stove and icebox doors swing open and shut, all the objects in the room move and jig about, and so does my head, lolling back and forth beyond my control. A little peculiar, but hey, that’s Progress for you.

“Say, Mother!” I call out. The wood-panelled wall to my right disappears on my command.  Illuminated from behind, you can see it’s nothing more than thin transparent printed fabric, almost invisible now, revealing the laundry room. Mother is ironing my night-shirts in her blue and white collared smock. She has to rest the knuckles of her left hand on the lip of the board to use the full force of her body, pressing the hot iron down onto the fabric back and forth, back and forth. It’s hard work. The Little Girl (I’m not sure on her name) sits behind on a wooden stool cranking endlessly away at the washer wheel. Mother helps explain Progress to the crowd. She says

“We have this new washday marvel. Now it takes me only five hours to do the wash. Imagine, it used to take two days!”

and the audience laughs, though I reckon they mustn’t quite get the joke since Mother’s never managed the wash in just five hours seeing as though she’s been doing the same load her whole entire life.

Since I never sleep, I can’t dream, but from time to time I like to imagine getting up on my feet to stand next to her, real close, close enough to scoop up her hair and hold my hand against the back of her head, nuzzle into the crook of her collar and take my first ever breath against the hot flush of her skin. I imagine her so clean, so fresh, embossed with a faint sheen of perspiration from the laundry’s steam, her scent filling my nostrils. Of course, I know that her skin most likely smells like paraffin wax, same as mine. It’s made of thick rubber, moulded and stretched across metal bones, but that’s Progress for you. When we’ve finished our conversation her light goes off, the wall is solid again.

That’ll be my boy Jimmy. He’s in the drawing room that’s appeared on the other side of the stage to my left, holding a metal viewfinder to his lidless glass eyes.

“Now James,” I say sternly, “I thought I told you to ask my permission before using my new stereoscope. That’s not a toy you know!”

He’s watching Little Egypt do the hoochie-coochie. She’s a knockout! Star of the 1904 World’s Fair in St. Louis. And Little Jimmy sure loves to watch Little Egypt.

“Now you put that away before your mother finds it.”

His light goes off, and we leave him be, alone in the dark, peering into the box, watching her thrust and gyrate forever. I don’t have to worry much about what he gets up to, seeing as though his little hands never move, and any which ways there’s nothing down there below that works. I can tell you that from experience.

I talk to the audience some more about Progress, filling a little for time and to cover the whirring mechanical noises behind the wall where Jimmy’s room just was. If you look up close you can make out waves rippling in the fabric, and now, when the light’s back on again, it’s my little girl Pat’s room. She’s sat at the vanity, fussing over her hair, wearing nothing but her pink corset and petticoat.

She’s getting ready for a Valentine’s date across town that she’ll never go on.

“Now you be home by nine o’clock daughter. You hear me?”

“Yes Father,” she sighs, jutting her chin down, and I’m proud at what a good job she does sounding real sad. Her light goes off too and I reckon it must be hard for her to carry on making herself up in the dark.

By now it’s almost time for the audience to head off. Their next stop’s The Twenties. Twenties Father isn’t as fancily dressed as me; they’ve put him in a blue starched shirt with some ludicrous bright yellow bow-tie – crazy looking if you ask me. He must’ve given up smoking because instead of a pipe he’s got a little paddle in his hand with “Niagara Falls” hand-painted on in curved white capitals, which he swats back and forth like he’s volleying an invisible ball. Though the only chance I get to see him is at the end of the day, when the crowds all leave, and they pull us down into the basement store to retouch our creased faces where any paint has flaked off, darn our worn-out sleeves, and peel back our skin to slather on the oil and grease and jelly that lubricates the sockets in our aluminium joints. They took his whole head off once, and let it drop to the floor. It rolled about, his silly toupee sticking up like a coconut husk, and wobbled near my feet. It had a swampy, dead, smell. I don’t like him much.

The music starts up, and it’s my cue to start singing again. The whole auditorium shakes as the Carousel moves, taking the room and the people with it and bringing a fresh lot in. They love the show, but there are hidden, small, things they don’t want to focus their eyes on, and they always turn away before they see something they cannot unsee. When they leave, they’ll go back to their homes, to their warm beds and their sweet children, and thank god for the sunlight in their lives, while the Carousel keeps turning and turning and turning and seals up time within itself.

Shining at the end of every day”

The crowds are small today, only a handful of families on the next rotation. Back in the day, when Progress was new, we were a lot more popular, could fill every seat in the house on every turn of the Carousel. I think it made people feel a little more solid about themselves, to know even after they leave that I’ll still be here, sat in my rocking chair, and Mother’ll be steaming those shirts, and Jimmy and Patty’ll be hiding away, while the wind-up racket of our conversation whirrs on and on. The joy of Progress fixed forever. But tastes change, even if I always stay the same. People don’t seem much interested in Progress these days, but hey that’s Progress for you. 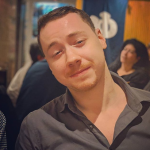 Richard Roper is one of thousands of Mancunians living in London. He currently works in marketing, but his real passion is applying for other jobs.