Vanessa Onwuemezi has won the White Review short story prize 2019 for her captivating short story, At the Heart of Things. Here she talks to Aisha Phoenix about her writing journey and what the prize means for her as a writer.

What led you to choose to study MA Creative Writing at Birkbeck?

I had been writing a bit, but hadn’t really thought about doing an MA. I was sceptical about the idea. But while working at the Young Vic a girl started in my team who was doing the MA and I met Julia through her at a party. Julia spoke to me about the MA and we went for a coffee a few weeks later. I sent her a story and she said, “I think you should apply.” I ended up applying to the MA that way. I met Julia, I liked her and the evening classes was the thing really because I wouldn’t have been able to do an MA, full time or otherwise. I had to work at the same time.

How has the Birkbeck MA in Creative Writing helped to shape you as a writer?

The workshop format is really helpful. It depends how you engage with it, but for me workshopping really helped me to understand how people read and how what you do with the text impacts the way people read it. It’s not so much about whether people like it or not, or whether they understand it on the level you mean it, it’s more about if you move a comma here or here, how someone reads it and the difference that makes, and registering that the way you write something will change the way someone reads it. That was the most useful thing for me, going through cycles of workshopping.

What inspired you to write At the Heart of Things?

Around the time I started it I had been writing a few things all titled At the Heart of Things, I had written a poem and another short story. At the time I was reading a lot of Wittgenstein, the philosopher. It probably came out of something related to that, related to his ideas in some kind of way.

In what way has Wittgenstein inspired you?

I couldn’t make a direct link between what I’d read and why I wrote that story, but the themes in the story became a preoccupation around that time. A lot of Wittgenstein’s ideas are about logic and language and how we use language and how language is a barrier. There are lots of things that can’t be said, is what he talks about. Philosophy is limited in how much it can say about what’s at the heart of things.

In the story there is a lot of reference to how the main character can’t say what she wants to say. It ends where the sentences just cut off because she can’t really say what she means. There are parallels along those lines between what Wittgenstein says, I’m paraphrasing: “Whereof one cannot speak, one must be silent” – the last line of the Tractatus.

Without revealing too much, can you describe what the story is about?

It’s just about what’s on the page. It’s about a woman who falls down the stairs on the way to work and then she starts making or hallucinating these visits to the bottom of the ocean. She has an estranged relationship with her sister, her dad is dead and her mum is estranged and family drop in and out of her life.

I don’t really want people to have to interpret things, you just read it and enjoy it for what it is, however you understand it. I still have to read it to try and understand what it means. I think that’s what people should do when they read anything. There’s no hidden meaning that I’ve consciously written into there. What I mean to say is, if I could say what it is about, I wouldn’t have needed to write it.

I felt like you were playing with language and punctuation and form in this story. Is this typical of how you write now and can you talk about how you describe your writing style?

It’s becoming more typical. I started this maybe in July last year and of everything I’ve written since then, this has been more typical in terms of language. When I was finishing the MA I’d read Eley Williams, Attrib. And Other Stories. She’d done interesting stuff in her short stories with typography and lots of spaces in the text, which I really liked. There are lots of writers and poets who do that. Mallarmé is a good one.

I like it, I think because I was really musical when I was younger. The way music is written and how it incorporates pauses and spaces is perhaps why I leave spaces and pauses in the text. Sometimes you want to put emphasis on a word, instead of putting commas around it, which I don’t think give as much emphasis on the word as spaces around it do.

It’s still an experiment. I don’t know what’s going to happen to the gaps in the next draft. You don’t want the text to look like a mess, but it helps mete out the rhythm of the text. I’m a stickler for how rhythmic it is and how it reads. The gaps are to slow it down and also to put the emphasis where I want the emphasis to be.

How did you feel when you won the White Review short story prize?

When I was shortlisted I was like, “Oh, great!” It had been on my mind because I knew the shortlist was coming out, but since I hadn’t heard anything the day before, I wrote it off. I thought it was a good piece, but I haven’t made it this year and then Martin, who did the MA with me, called me and said, “Congratulations!”

Then I didn’t think about it for a week until a few hours before the prize was due to be announced and then suddenly I was incredibly nervous. When they read my name out it was a relief that all that adrenalin could dissipate. It didn’t sink in until a few hours later after I’d had a few drinks.

Have any opportunities arisen from the White Review win?

I have had a few agents get in touch, which is really nice. So I’ve sent what I have of the rest of the collection to some agents now and I’m waiting to hear really. The prize money is really great as it gives you more time. I have a part-time job and I do bits of freelancing around, which is kind of tiring and takes up big chunks of time. The money just means I don’t have to work as much this year. That’s a great thing because it means I have the opportunity to write more.

I have been told that a few editors have asked for my email address. I don’t know who they are. It’s all a bit of a mystery at the moment.

Are you working on your collection now?

Yes. This story would be part of that collection. A similar style of stories, some much shorter, some around the same length. It’s just evolving at the moment. Maybe I’m two-thirds of the way. I have quite a lot to do on it still, but there is a collection underway.

Read Vanessa’s short story At the Heart Of Things here 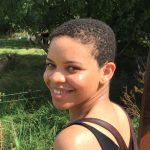 Vanessa Onwuemezi is a writer and poet living in London. Vanessa recently graduated from the MA Creative Writing course at Birkbeck, University of London. She won The White Review short story prize 2019, was a Showcase writer featured by the Literary Consultancy, UK (2018) and she received a commendation for her flash fiction from Bare Fiction magazine (2017). She is interested in artist collaborations, having produced the accompanying text for the photography exhibition by Alex Stone, INTERVENTION I (2018) and text for artist Lauren Keeley, shown at Frieze, London 2018. 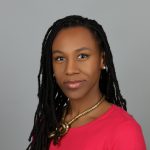 Aisha Phoenix is an MA Creative Writing student at Birkbeck. She writes fiction and poetry and has had work published in: Peepal Tree Press’s Filigree poetry anthology, the Bath Flash Fiction anthology, Strange Horizons, Litro USA online, Bards and Sages, Crack the Spine, Word Riot and the Oxonian Review of Books. She has a PhD in Sociology from Goldsmiths, University of London. Aisha Phoenix is a MIROnline features writer. She tweets as @FirebirdN4.