Leila Segal reads from her debut collection, Breathe. MIRLive’s Alison Hitchock shares work from her letter writing project, From Me To You. Leila and Alison are joined by five more wonderful women reading poetry and short stories.

The full line up for our January MIRLive will be Sharon Eckman, Roxanne Forbes, From Me To You, Lauren Miller, Jo Holloway, Stella Klein and Leila Segal. This event takes place at The Harrison (28 Harrison St, London WC1H 8JF) on Monday January 30th. Doors open at 7pm for a 7.30 start. Entry is free and open to everyone. 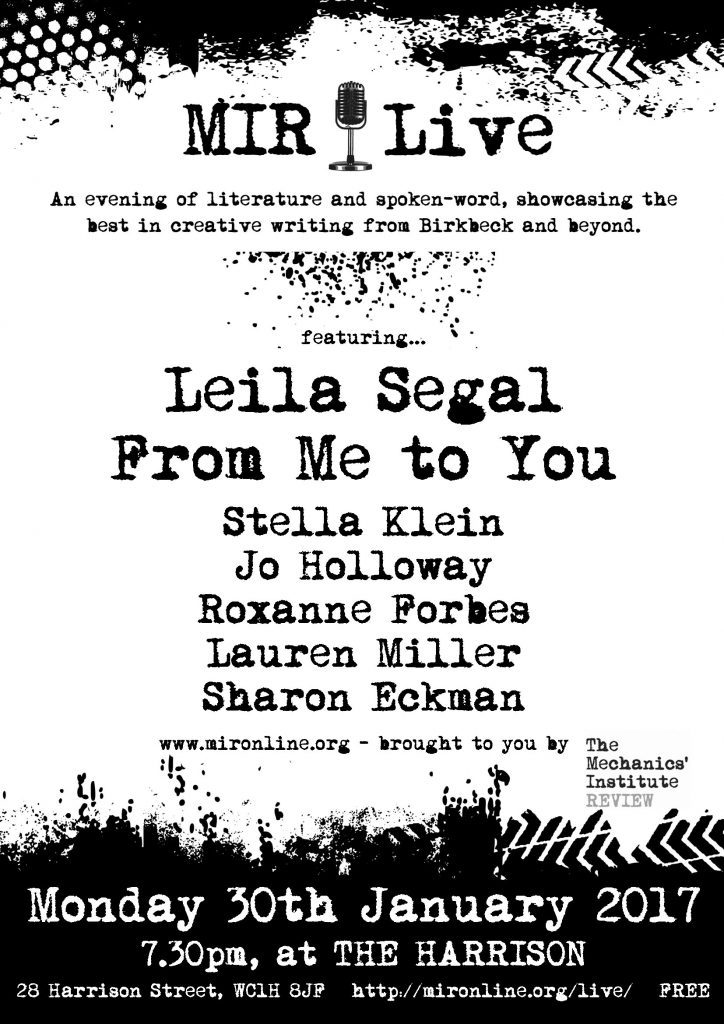 Our Readers
Leila Segal was born in London, of Polish, Lithuanian and Romanian descent. ‘Breathe: Stories from Cuba’ (Flipped Eye, 2016) is her debut collection, and originates in the time she lived in Havana and the Pinar del Río province of Cuba. Her writing has been published in magazines and journals including Litro, Wasafiri Magazine, Generations Literary Journal, Papeles de la Mancuspia, Loose Muse Anthology, Square Peg, and Ink, Sweat & Tears. Leila led the Jaffa Photography Project, with Arab-Jewish collective Sdaka Reut, using word and image to bring together Arab and Jewish teenagers, and is the director of Voice of Freedom, a project with formerly trafficked women. Voice of Freedom enables women who have escaped their captors, and sometimes given evidence against them, to use text and photography to talk about their lives. Find out more at www.leilasegal.com

Sharon Eckman is a multi-tasking actor/singer/writer. She was Time Out Travel Writer of the Year – non-fiction has appeared in broadsheets and magazines on topics ranging from Namibian hunters to London science fiction fans .She was longlisted for the Fish Memoir Prize 2015 and shortlisted for Words & Women Prose competition 2016. Short fiction has appeared in Shooter Lit, Words & Women: 3 and 100 Voices: An Anthology. www.sharoneckman.com

Lauren Miller is currently studying part time on the Creative Writing MA at Birkbeck. She was featured in MIR 13 and has performed at salon readings in London and New York. She studied Fine Art at Central Saint Martins and is training to be a teacher.

Roxanne Forbes left the rainforests of Hawaii for the cold urban rain of London and is perfectly happy about it, so stop asking about the weather, what, you don’t think it rains in Hawaii every day? She is working on finishing her first novel, which is also about rain. She really likes rain.

From Me to You is a project which encourages letter writing to friends and family members suffering from cancer; keeping us connected at a time when we can feel most disconnected.
From Me to You was set up by friends Alison Hitchcock and Brian Greenley. When Brian was diagnosed with cancer in 2010, Alison began to write to him; six years later, those letters have changed both their lives. On Christmas Day 2016 they were featured on Radio 4, telling their story. www.frommetoyouletters.co.uk. Twitter: @frommetoyou01. Facebook: FromMetoYouLetters

Jo Holloway is from Letchworth in Hertfordshire. She was a History teacher for six years, and now writes educational resources for a film charity. When she’s not writing, she enjoys running, baking and going travelling. She is currently in her second year studying for an MA in Creative Writing at Birkbeck.

Stella Klein has just completed the Birkbeck MA in Creative Writing and is working on her first collection of short stories. Her story New Materiality appeared in the last issue of the Mechanics Institute Review and Flesh & Bones which she is going to read this evening is possibly part of a longer new story in the making.