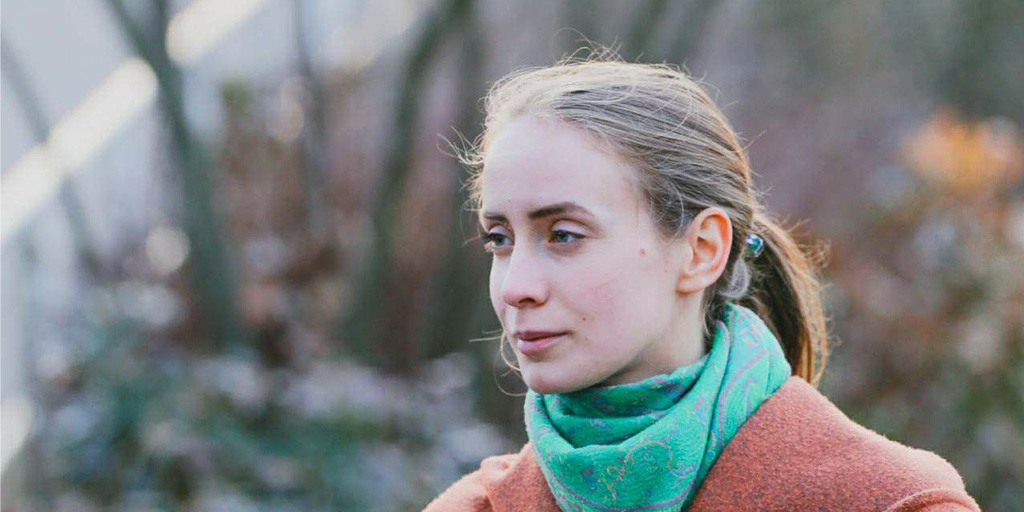 Narrating the War, a documentary play by Anastasiia Kosodii

How did you decide to flee the country? How does a person make that decision?

Are your parents still in Ukraine? How are they? Are they afraid?

Where are your friends now? Are you still in touch with them?

How has the Russian war against Ukraine influenced your work?

(he wrote ‘the war in Ukraine’ of course)

Scene 1 – I really envy you all

I’m standing at the Fizkultura stop waiting for the trolleybus
in Kyiv it’s mid-December freezing cold -15 degrees
the time 11pm on the app the little triangle of the trolleybus moves from Olimpiiska station to Palats Sportu station (terminus), the driver will take a cigarette break there then start to drive in my direction
if he can get past all the snow heaped
on the roads
I’m waiting for the trolleybus I
don’t value myself enough to call a taxi I
look at the snow
I
think about summer last year
when I got off the metro at Palats Sportu walked to the synagogue went into the courtyards to look for the balcony of an old woman
who was evacuated from Kyiv in 1942 with her aunt the rest of the family stayed they were all shot at Babyn Yar

it was a typical Ukrainian summer unbearable 34 degrees
(I’m inventing all this I don’t remember anything)
I went into the courtyard and asked a local woman if she knew of a balcony here that was the first in Kyiv the woman looked at me wearily
but she pointed at something and I took a photo of something
a balcony that looked like it might be the oldest and the first
it was actually the right one
but maybe that’s just what Rachel wanted to believe
(does she remember her balcony would she recognise it nowadays?)

Scene 3 – The most realistic dialogue ever (I feel nothing)

Your driver Roman is arriving.

ROMAN: Bist du spät dran?
ME: Sorry I don’t speak German that well.
ROMAN: Are you running late or something?
ME: No. U-Bahn is broken, so I decided to take a cab.
ROMAN: I see. Are you from the UK?
ME: No.
ROMAN: No?
ME: Ukraine.
ROMAN: Oh.
ME: And you?
ROMAN: Russian. I’m Russian.
ME: Oh.
ROMAN: (In Russian) When did you get here?
ME: (In Ukrainian) 2 March.
ROMAN: Huh?
ME: (In Ukrainian) I came here on 2 March.
ROMAN: Sorry, probably better to speak in English. I don’t understand a word of Ukrainian.
ME: Second of March.
ROMAN: And do you like Berlin?
ME: I mean, I’ve been here a lot.

ME: Do you consider yourself German?
ROMAN: I mean, I consider myself a human being.
ME: Okay.
ROMAN: Haha. Well, I’m Russian, of course. I’m Russian, but I’m not the government.

ROMAN: And you know, it’s good that people here see these things in a good way… I have many Ukrainian friends, we had no fights with them.

Scene 4 – Obviously I wish death on all Russians

fruit pits will sprout into fruit trees and berry seeds will grow into fruit-bearing bushes
a vine grown from grape seeds will embrace the walls of the buildings and the sun will warm it and the trees and the bushes
the stars
will give the trees and bushes a breather to drink the dew and Russian bones will lie in the earth which naturally will accept them even though it has no use for them because what does the earth need with composted Russian flesh on Russian bones but what can you do if those bones decided to come here from their cold, far-flung cities the land
will give the Russians the land that they wanted it will give
work to future archaeologists future historians when they come
when they dig up
the bones of Russians

Scene 5 – The Russians have stolen summer nights from us

the sun hangs in the sky for hours covers your hair exposes your legs so they match your white dress
when it finally goes down
everyone checks how long until curfew
half an hour or less
they wonder how fast they’re prepared to walk
ask their friends if they’ve been late before and what kind of checks there were
eventually they get up to say goodbye leaving their unfinished beer lighting a cigarette on the way
they walk through the old town touching the pavement with the soles of their trainers looking at the angels wrapped in protective fabric in front of the cathedrals wondering what that fabric will actually protect them from
they realise it’s probably just
to keep the debris in one place
they meet three girls one of them shouts
I never want to leave Lviv!
another shouts
Yana stop pissing around it’s nine minutes until curfew please can we go already

the stone angels have the time and
someone has to

some air raid alerts have no all-clear
at first the siren sounds from the phone app, half a minute later all the loudspeakers in
the city join in
you get out of bed
citizens are asked to proceed to the shelters
on messaging services the local authorities write
Warning! Air raid alert!

the sound rises up falls down and repeats

if that’s hard for you to live with
you can pretend there are time limits
make predictions omit the word maybe imbue your words with the power of genuine prescience
we’re not going to buy winter clothes say a mother and daughter who escaped the occupied territories
why would we stay in Kyiv so long?
we’re not going to stay long
Ukraine will be a better place when we win says another woman
she’s travelling from Denmark to see her husband in Kyiv her daughter’s still in Europe
only the people who really want to live here and rebuild will return
lie by a wall where there’s no windows says my mum it’s an old building from the 18th century
walls half a metre thick
it’ll protect us from shrapnel as long as the rocket doesn’t land directly here of course

loneliness
time that’s not enough and too much
sleep deprivation
tenderness
the practice of digging trenches
cowardice that’s bravery and vice versa
that phrase from Doctor Who when the Doctor tells Clara that everyone gets stuck
somewhere eventually on the planet Trenzalore i.e. death

loneliness
time that moves as it wishes
how are you? and
everything’s calm here
even the smallest donations make a difference
all the balconies we’ve left behind
our exhaustion
dawn at 5am
sirens that protect us
brave people who are also afraid
stories about them
that we are yet to narrate
now and when it ends
to you

Anastasiia Kosodii is a Ukrainian playwright, director, and one of the co-founders of Theater of Playwrights in Kyiv. Before the full-scale Russian invasion, Kosodii often worked with NGOs in eastern Ukraine in towns on the front line. Her international work includes projects at the Maxim Gorki Theater (Berlin) and Münchner Kammerspiele Theater (Munich) and the Royal Court Theatre (London).

The two documentary plays, ‘Narrating the War‘ by Anastasiia Kosodii, and ‘A Marathon of Russian Roulette‘ by Kateryna Penkova were first presented on stage at the Camden People’s Theatre, London, on the 4th December 2022.

Both texts were translated by Helena Kernan.

The readings were followed by an in-person discussion with the playwrights, together with project curator Molly Flynn and writer/historian Olesya Khromeychuk. The plays were commissioned by BiGS (Birkbeck Gender & Sexuality), in conjunction with the Ukrainian Institute London and the Experimental Humanities Collaborative Network.

In the eight years between the start of Russia’s war in eastern Ukraine in 2014 and the full-scale invasion in 2022, Ukraine witnessed an impressive boom in socially engaged theatre and political playwriting. These recent documentary plays by Anastasiia Kosodii and Kateryna Penkova exemplify the remarkable culture of defiance and resistance in Ukrainian political playwriting and demonstrate how theatre-makers are using their craft to speak out against the atrocities of Russia’s ongoing war.